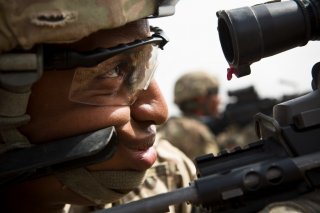 You’ve likely seen the term designated marksmen or squad designated marksmen tossed around this website, military publications, and other forms of military media lately. You might see it shortened as DM or SDM. The rifles these guys and gals use, you may have also heard, are called DMRs or SDMRs… But what does this all mean?

What’s a designated marksman? What rifles do they use? Let’s dive in and break it all down.

What’s a Designated Marksman? Not a sniper.

The biggest misinterpretation about DMs is that they are snipers. The confusion often comes from the rifles they carry, their use of magnified optics, and of common “sniper” accessories like bipods. The easy way to separate snipers from DMs, however, is to look at their assigned roles within their respective units.

The Designated Marksman isn’t a sniper, but the reason squads love a DM is because they can extend the effective range of a rifle squad out to 600 yards or so. From a video game shooter standpoint, that may sound like being a “sniper,” but within the organizational framework of the military, a DM is more infantryman than sniper.

A designated marksman doesn’t go off alone and pick off bad guys at half a mile away with a bolt action rifle while wearing a gilly suit. He or she is a rifleman with a rifle designed for long-range engagements, or incredibly precise engagements. Even at moderate ranges, the high-powered optics and accurized rifle the DM carries allow for a more efficient infantry squad.

Hitting a human target that’s hiding behind cover, returning fire, and moving can be difficult with a red dot or lower-powered prism optic like the standard-issue ACOG. A designated marksman, however, can zoom into the fight to see the threat clearly, as well as any opportunity to engage them.

During a deployment to Afghanistan, we were getting engaged from distances as long as 600 yards and had to fight our way forward to be effective. (Editor’s Note: The M4 service rifle and NATO 5.56 round have a maximum effective range of 500 meters.)

This made our DM, with his 12 power optic, extremely valuable at the beginning of engagements. Our DM could use his rifle to not only provide effective fire, but also to direct machine gun and grenade launcher fire more effectively.

What Rifles Do They Use?

The Designated Marksmen concept caught on early with infantry forces during the beginning of the Global War on Terror (GWOT). However, in the early days, there weren’t necessarily special rifles for the role. The Army would issue an ACOG to soldiers, and their M4 or M16 would act as a marksmen’s rifle.

As far as dedicated rifles went, the old M14 often got pulled out of storage and was put to this task. The M14 is not a very accurate rifle, so the Army and Marine Corps would often have these guns accurized. However, that accurizing was fragile, and they could often revert back to their old, inaccurate ways if taken apart and cleaned thoroughly. America’s troops needed a better option.

The Marine Corps called their M14 variant the M39 Enhanced Marksman Rifle, and the Army utilized a number of designations. The M21 variant of the M14 was originally made as a sniper rifle but was then pushed to the DMR role. The M14SE was another DMR designation that found its way into the hands of DMs. Optics varied but were almost always variable scopes with a high range of magnification.

Over time, the use of highly accurized M16 variants became the norm. In 2008, the Mk12 and SAM-R became the DMR of choice for the Marine Corps. These guns were slightly different but achieved the same goal of extending the range of the rifle squad and providing a very accurate rifle at the squad level.

These days in the Marine Corps, the designated marksman wields the M38. The M38 DMR is the M27 IAR (Infantry Automatic Rifle) outfitted with a 2.8-8 power rifle scope and a bipod. M27 rifles are very accurate by their nature and do not need special accurizing over the standard M16 platform. It also ensures training is consistent between the two rifles. This allows Marines to effortlessly swap between their normal service rifle and the DMR.

The Army selected the HK G28 rifle, which is the 7.62 NATO variant of the HK 416. The HK 416 forms the core of the M27 IAR, as well. This modern, semi-auto platform allows soldiers to reach out further with more firepower and greater penetration than ever before. The rifle is outfitted with the SIG TANGO6T rifle scope with a versatile 1-6X magnification.

How do you become a Designated Marksman?

Designated Marksman is not a MOS (Military Occupational Specialty) you can secure through your enlistment contract. It’s a billet filled much like a SAW gunner, grenadier, and similar positions within a squad. The best way to find yourself in the DM billet is to express interest in doing so and then score well at the rifle range. Link up with DM’s in your platoon or company and ask them about it. Learn from them whenever possible.

Both the Marine Corps and Army have specialized schools for instruction on DM rifles. In these programs, Marines and Soldiers learn the ins and outs of the DM rifle, including how to use their weapon and optics to shoot at long ranges. These schools are often short but packed with information; that means long days and long nights of study. Nobody ever said being the squad-designated marksman was easy.

If you achieve your goal, understand that you are an important part of your squad. Take your training seriously, and master your weapon. The squad designated marksmen have changed infantry squads for the better and have made them more capable and more lethal in the field. At the end of the day, that’s what an infantry squad is all about.

This first apperead in Sandboxx News.