Is the Desire to Punish about Revenge or Justice? 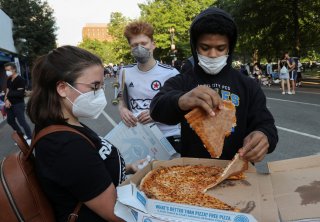 Imagine you and your friend are at a party and someone orders pizza. You’re starving. You put a couple of slices on your plate and sit down at the table. Before you start eating, you excuse yourself to wash your hands.

On your way back from the bathroom, you look across the room just in time to see your friend grab one of the slices off your plate and start to eat it. This would probably make you mad, right? You might even feel an urge to get back at them somehow.

Now imagine a slightly different scenario. You and your friend are at the same party but before you have the chance to get pizza, you excuse yourself to wash your hands. While you’re gone, the pizza is served and your friend grabs a couple slices for themself but only one for you.

This would also probably make you kind of mad, right? But why? This time your friend didn’t actually steal your pizza, so why does it feel like they did something wrong?

The answer is that unfairness alone is upsetting – upsetting enough to drive people to punish those who have benefited from unfair outcomes.

My colleagues and I recently completed a psychology experiment that supports this concept. The idea that unfairness alone can motivate punishment runs counter to a lot of existing research that suggests punishment is driven primarily by revenge.

Why does this matter? Because understanding what motivates punishment can help shed light on the functions it serves in human societies – and possibly even why punishment evolved in the first place.

Revenge-based punishment may serve an important deterrence function – encouraging those who have harmed you to behave better in the future.

Inequity-based punishment, on the other hand, may serve an important leveling function – making sure you’re not worse off than those around you, potentially giving you a competitive edge – or at least preventing others from gaining too much of a step up.

In our study, we wanted to understand what drives people to punish others. Is it revenge, inequity or both?

We paired up thousands of participants who had never met in an online economic game in which they made decisions about real money. In one condition, just as in the first pizza example, one player stole money from another player. In some cases, depending on the amount of money the victim started with, stealing meant the thief ended up with more money than the victim.

We expected this theft would motivate victims to punish and we were right: People do not like being stolen from and would pay to punish thieves, reducing their income in the game. This evidence supports the idea that punishment is motivated by revenge.

However, this scenario didn’t tell us whether people also punish in response to unfairness. To test this possibility, we designed a similar situation – one that resulted in one player ending up with more than the other – but, in this case, no theft occurred. Rather, like the second pizza example, one player had a chance to gift money to the other player, at no cost to themself, or the money disappeared.

In these cases, a player who refused to give money to the other would sometimes end up with more money – the unfair outcome we were curious about. Interestingly, we found people were more likely to punish when they had less money than the other player – even when no theft had occurred.

This showed us that unfairness alone, even in the absence of a direct transgression like theft, is enough to motivate punishment.

Our new findings are exciting because they suggest that people have different motivations to punish others. Sure, people are motivated to seek revenge on those who have stolen from them, but they are also willing to punish in cases where they simply have less than others.

This finding suggests punishment likely evolved for different uses – deterrence as well as leveling the playing field – showcasing how one behavior can serve different functions. That punishment can serve such different functions implies that both deterrence and resource leveling might have increased the genetic fitness of our ancestors. In other words, as humans evolved, people who punished to deter others or level the playing field passed on more of their genes than those who punished less.

So next time you’re deciding whether to take more than your fair share of pizza, maybe think twice. Otherwise you might unwittingly become the target of a hungry punisher looking for justice.