Did Biden Halt the Deployment of Advanced Surveillance Systems at the Border? 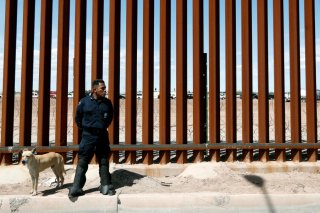 Here's What You Need to Know: Advanced surveillance technologies were a critical component of the Trump administration's construction program.

When President Joe Biden terminated funding for former President Donald Trump’s controversial border wall, an unintended consequence of that decision was to stop deployment of several advanced electronic surveillance capabilities. Ironically, on many parts of the border, these systems provide an alternative to a physical wall. Advanced surveillance capabilities act as a force multiplier for badly overstretched Customs and Border Patrol (CBP) personnel.

At a time when activities on the border are increasing at a remarkable pace, both crossings by migrants and asylum seekers and drug smuggling, it is imperative that we give those securing the southwestern border the tools they need. The Biden administration and Congress need to restore that portion of the funding for the wall that was designated for advanced surveillance capabilities.

CBP is under tremendous pressure on multiple fronts. Most publicized is the increase in migrants presenting themselves at the border. The rate of attempted crossings along the border with Mexico has more than tripled from this time last year. There has also been a major increase in the number of unaccompanied children attempting to cross, leading to scenes of young children being abandoned on the U.S. side of the border. To demonstrate the value of electronic border surveillance, cameras captured two small children being dropped over a portion of the border fence to then fend for themselves earlier this year.

In addition, drug smuggling has increased significantly since last year. CBP reported a 233 percent increase in fentanyl seizures from 2020 to 2021 so far. It has been suggested that Mexican drug cartels are helping migrants reach the border to stress CBP resources so there is less chance of their smuggling operations being detected and intercepted.

Securing the border has always been about more than just building walls. CBP has been investing in technologies for enhanced surveillance, communications, and situational awareness for more than twenty years. Major advances have occurred in land-based electro-optical and radar sensors, surveillance aircraft, balloons and drones, ground sensors, fiber optic communications, advanced analytics and AI, and the development of a common operating picture. CBP has deployed combinations of these technologies at various sectors along the border, sometimes in addition to physical barriers. In other cases, they are deployed as the primary means of monitoring the border.

One capability that CBP has found extremely effective is remote sensing using a variety of cameras and radar systems attached to both fixed and mobile towers. CBP has worked with industry for years to develop the specific technologies needed to provide reliable and cost-effective remote surveillance. These towers allow CBP to monitor the border and be alerted to human activity without having to devote already-scarce manpower. In this process, data is gathered and fused at command centers where artificial intelligence assists in making accurate assessments of events in the field.

Likewise, several different tower-based remote sensing capabilities have been deployed. One example is the Integrated Fixed Tower (IFT) system, consisting of high fixed towers topped with electro-optical and infrared cameras, ground-searching radars and a laser rangefinder capable of seeing at ranges greater than 10 kilometers. The IFT system is particularly well-suited to looking into Mexico from positions relatively far from the border.

Another system that has been deployed is the Remote Video Surveillance System (RVSS), consisting of a mix of fixed and truck-mounted mobile towers generally deployed close to the border. A third framework is the Autonomous Surveillance Towers (AST) system which, like the other tower programs, employs multi-spectral sensing to provide situational awareness of the border. As the name suggests, the towers are designed with a high degree of autonomy, made possible, in part, by reliance on solar power, to reduce the demand on CBP personnel.

As part of the Trump administration’s wall construction project, CBP invested in a combination of ground-based acoustic, vibration, and visual sensors, including fiber optic cables, that can detect activity at the border. Using artificial intelligence and machine learning, algorithms can distinguish natural phenomena and animals from human beings. This system uses artificial intelligence and machine learning algorithms to help create a common operating picture in support of CBP command and control.

While most of the reporting of the Trump administration’s approach to border security focused on the construction of a physical wall, advanced surveillance technologies such as those described above were part of this construction program. Halting construction of the wall does not mean that the Biden administration will be able to reap significant savings. Much of the money allocated in the current and prior fiscal years has been spent. Other wall-related funding is only available in the year in which it is budgeted (“one year money”).

There is a lot of unanticipated collateral damage to CBP’s planned investment in advanced technologies from the way the Biden administration has handled cancelling construction of the wall. This decision did not just stop construction of the physical wall. It also put a halt to construction and deployment of a host of surveillance capabilities that were key to CBP’s overall plan for monitoring the border. There are systems, including some of the towers discussed above, that have been built and were just waiting to be deployed. Now the government, having already paid for these towers and other surveillance capabilities, will have to store them, at considerable expense.

The sudden cancellation of all activities that fell under the contracts involved in construction of the wall will have a serious negative effect on CBP’s efforts to invest in advanced surveillance systems that can serve as an alternative to a physical wall. This comes at a particularly bad time for CBP, which is struggling to deal with the increase in migration and smuggling activities along the border. Deploying these advanced sensor systems would help alleviate this stress as well as significantly improve CBP’s ability to prevent humanitarian problems along a dangerous border.

The Biden administration should revisit the way it cancelled the construction of the wall. It needs to break out the funds that would have gone for technology meant to supplement or even replace physical barriers. It also needs to increase overall funding for CBP, which is having to take money from its modernization efforts to meet the increase in operational tempo fueled by the surge of migrants and illicit activity at the border.