Did Michael Jordan Really Have the Flu in the “Flu Game”? 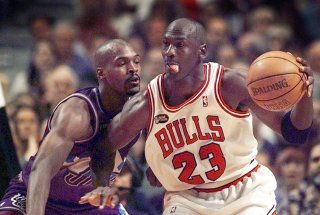 It is one of the most famous on-court performances in Michael Jordan’s legendary career: On June 11, 1998, Jordan was suffering from the flu and visibly sick.

Yet he still went ahead and played Game 5 of the NBA Finals, scoring 38 points to lead the Chicago Bulls to a 90-88 win over the Utah Jazz. Two days later with Jordan healthy again, the Bulls would beat the Jazz again in Game 6 to win the series and the last of Jordan’s six NBA championships.

That was the common understanding of that night for more than 20 years, at least until last year’s documentary “The Last Dance.”

That multi-part documentary on ESPN featured a deep dive look at the 1998 Bulls season, including flashbacks to the previous years of Jordan’s run with the Bulls. In the ninth episode of the show, Jordan and the other participants told the story of the “Flu Game”- and revealed that the cause of Jordan’s sickness probably was not the flu after all.

According to a Sports Illustrated account of the episode, the culprit may very well have been a pizza. The team, late the previous night, had ordered pizza from a local establishment in Utah, and when it was delivered, five people had come to deliver the pizza. The rest of the party thought this was odd and decided not to eat the pizza, except for Jordan, who did. Hours later the superstar was severely ill and doubled over in pain.

This led to some speculation that the pizza place, perhaps loyal to the hometown team, had poisoned Jordan’s pizza, but the actual restaurant was not named in the documentary. A possible alternate explanation for the large delivery detail was that a bunch of restaurant employees wanted to have a chance to meet Michael Jordan.

“The Last Dance” was not the first time this story had been told. Jordan’s personal trainer, Tim Grover, had spilled the beans in a 2013 interview with TrueHoop TV. Grover later told the story again in “The Last Dance.”

"Everyone called it a 'Flu Game,' but we sat there, and we were in the room, we were in Park City, Utah, up in a hotel. Room service stopped at like 9 o'clock. And he got hungry, and we really couldn't find any other place to eat so we ordered ... I said, 'Hey, the only thing I could find is a pizza place.' He said, 'All right, order pizza.' We had been there for a while, so everybody knows what hotel ... I mean Park City (didn't have) many hotels back then. Everybody kind of knew where we were staying,” Grover said in the 2013 interview.

"So, we order a pizza, they come to deliver it, five guys come to deliver this pizza. And I'm just ... I take the pizza, and I tell them, I said, 'I got a bad feeling about this.' I said, 'I just got a bad feeling about this.' Out of everybody in the room, he was the only one that ate. Nobody else ... then 2 o'clock in the morning, I get a call to my room. I come to the room, he's curled up, he's curled up in the fetal position. We're looking at him. We're finding the team physician at that time. And immediately I said, 'It's food poisoning.' Guaranteed. Not the flu."

Ron Harper, a Jordan teammate, had speculated even earlier than that about “bad pizza” having caused Jordan’s flu-like symptoms.

Of course, in a post-coronavirus world, a situation like that happening today would likely cause concern that a player, if he did have the flu, would risk infecting teammates or opponents. And it is also something of a surprise that no athlete ever failed a coronavirus test, concealed it, and tried to have a “flu game” of their own.

Stephen Silver is a Technology Writer for the National Interest with a keen interest and sports, among other topics.