Did Seattle's Former Police Chief Just Save Her City From Future Chaos? 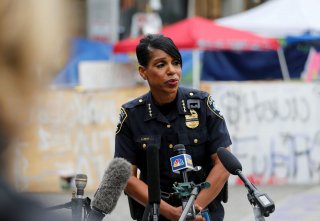 After weeks of violent unrest, Seattle’s Black Lives Matter activists got their way. The City Council partially “defunded” the Seattle Police Department, and it will fire up to 100 police officers.

Although the Seattle City Council stopped well short of the 50% budget defunding it initially promised, the council did significant damage to the police force and promised more cuts.

Police Chief Carmen Best, however, refused to accept the outcome. She resigned. And in doing so, she just may have saved the city of Seattle.

Best began her nearly three-decade career at the Seattle Police Department as an officer, working her way up through the ranks. Both the community and colleagues seem to have loved her.

Indeed, after a contentious selection process by Mayor Jenny Durkan in which Best’s name was left off the list of finalists for police chief in 2018, uproar from residents forced the Democrat mayor to reconsider.

The flap ended up landing Best the job. It was historic: She became the city’s first black, female police chief.

But during the anti-police protests following the May 25 death of a black man at the hands of police in Minneapolis, Best found herself in the crosshairs of the City Council’s seven Democrats and two Socialists, who were eager to placate an ideologically driven movement to defund the police.

In the immediate aftermath of George Floyd’s apparent murder in Minneapolis, Seattle’s self-styled progressive activists took to the streets.

Although Seattle hasn’t had many objectively controversial police-involved deaths like that of Floyd—not by any reasonable standards, at least—the activists took advantage of the moment, demanding radical police reforms and dramatic budget cuts.

Some of the demands were aspirational: Don’t devalue black lives. Others were more nebulous: Divert police funding to unnamed community programs to serve black communities. Still others were just plain radical: Abolish the police altogether because it’s a system of white supremacy that cannot be fixed.

Eventually, the City Council pledged to defund the police budget by 50% across the board. Except the nine council members didn’t have a plan.

This doesn’t mean the council members didn’t have a pathway to work the nuances of midyear budgetary maneuvers (though actually, that wasn’t quite clear at the time). And it didn’t mean they didn’t have institutional support. Indeed, the council had a veto-proof majority backing the defunding pledge, rendering Durkan’s opposition to the idea meaningless.

The council literally didn’t have a plan.

Community groups and union interests threw lots of ideas against the wall and individual council members adopted concepts such as a program to embed social workers in the police force. But not a single council member proposed a concrete plan to address how policing would function if the council simply cut the police force by half.

Council members worked the system backward. They proposed a budget cut, then decided what they would gut, assuming the end result would lead to a safer and more equitable Seattle. And with that kind of cut, they would have to fire almost half the staff of the Seattle Police Department.

Over 82% of the nearly $410 million police budget goes to personnel. In a letter to the council, Best noted that the council’s proposal would “require reductions of 681 of 755 members of patrol.”

That wouldn’t just be irresponsible; it would be dangerous.

And for three of the sitting council members, two of them newly elected, it was a position in stark opposition to their council campaigns less than a year earlier.

At a candidate forum hosted by the Seattle Police Officers Guild, council incumbent Lisa Herbold and first-time candidates Andrew Lewis and Dan Strauss, all Democrats, campaigned on the promise not only to support new police officers but to hire more. Now they were actively looking to gut the SPD.

These three council members dismissed the cries of hypocrisy and committed to defunding the police, backing activists who were growing increasingly violent.

The days of the Capitol Hill Occupied Protest—six-block occupied zone dubbed CHOP that saw two gun homicides, arson, vandalism, and attempted rape due to depolicing—were over. Now, activists took to the streets for frequent marches—and marauding—to put pressure on the City Council to meet their demands.

Small groups would wander through the streets chanting their normal invective, but some of them also would make stops along their path to destroy Starbucks outlets, Amazon Go markets, Whole Foods groceries, and various bank branches.

On two separate occasions, criminal activists tried to burn down Starbucks shops attached to apartment complexes. They burned down five construction trailers at the site of a future jail for juveniles, adding arson to their long list of crimes.

The  criminal activists also went after police. They tossed fireworks at officers during one illegal demonstration. Then, during a riot, they blew an 8-inch hole through the side of a wall of a precinct station with an explosive device.

SPD later revealed that investigators found a nearby van full of pyrotechnics, smoke bombs, stun guns, and bear spray. Conclusion: It was a coordinated assault.

Younger activists with a group called Everyday March went to the homes of council members and other public officials. They demanded that the council listen to their grievances and back their demands.

But they weren’t always so friendly; some vandalized the homes of two council members and threatened to physically harm one if he didn’t vote their way.

This same group recently diversified, drawing national attention for targeting white homeowners in one neighborhood, demanding that residents pay “reparations” and give up their homes so black people could move in.

Instead of being turned off by this criminal behavior, council members continued to support the mob’s wishes. But they ran into problems fulfilling their pledge.

The city’s charter, and the federal consent decree the Seattle Police Department operates under, require that the city provide residents with “adequate” police protection.

Would a federal judge be convinced that a 50% reduction in the police force budget, at a time when certain crimes are on the rise, would lead to adequate policing?

And the city would have to work with the police union on cuts this significant, since city employees have the right to collectively bargain.

And the Seattle Police Officers Guild wasn’t going down without a fight.

Officer Mike Solan, president of the police union, joined Best in an aggressive campaign to warn residents of what was coming if the council got its way.

The union blanketed radio airwaves with ads encouraging residents to sign an online petition and contact their council member. The union also held a rally, which thousands attended to support the police.

Best, meanwhile, made the media rounds to argue the case that this was the wrong move for the city. And the council wasn’t pleased. With no notice, on the morning of a budget vote, Socialist council member Kshama Sawant introduced a bill to cut Best’s salary—and that of her command staff—by 40%.

Although council members barely debated the measure to slash the salaries, it passed in a committee vote.

This was personal. Best’s private lawyer, Anne Bremner, sent signals on my Seattle-based radio show that the chief could sue the city.

After considerably more politicking, violent activism, and in-fighting, the full council vote was imminent. And not once did members consult with Best. They left police out of conversations about the future of policing.

After an all-day session, various amendments, and several speeches, council members agreed to make significant cuts to the SPD. They would gut the Navigation Team, a specialized unit that connected the homeless with shelters.

And the council would cut up to 100 officers, including SWAT officers and school resource officers.

The final vote was 7-1, with Debora Juarez absent and Sawant voting no because, she said, the final $3 million in cuts to the current budget did not go far enough.

Hours later, news leaked that Best was resigning. The following day, Aug. 11, she did just that.

The history-making chief stepped aside, calling the City Council’s actions vindictive and dangerous. She noted that after the council had tasked her with recruiting officers for an already dangerously understaffed force, she’d now have to fire those recruits.

The council would force the first black female police chief to fire minority officers to forward a message that “black lives matter.”

The chief’s resignation, effective Sept. 2, apparently caught the Seattle City Council off guard. Most members put out press releases praising the very chief they had chased out of the department, claiming this was never personal.

But neither residents nor the media seemed to buy it.

“We describe it as a death,” Victoria Beach, chairwoman of the SPD’s African American Community Advisory Council, said of the chief’s resignation. Beach added that she is thinking about leaving the city.

The Rev. Aaron Williams, a pastor at University Presbyterian Church, declared it “a very sad day in the city of Seattle.”

Even the group named Black Lives Matter Seattle/King County called out Best’s resignation, saying: “It does nothing to further our fight for authentic police accountability and the safety of Black lives.”

The Seattle Times’ editorial board flayed the “runaway” council for placating a small number of rabidly fringe activists while “the majority of Seattle’s 760,000 residents—and many others who work in and care about the city—are left out of the conversation.”

The Times’ editorial listed the phone numbers and email addresses of all nine council members, so that readers could sound off to them.

For the first time during this entire ordeal, though, regular citizens are starting to speak up in a meaningful way. Are they louder than the activists?

Not yet. Those radicals are still out on the streets, with a group rioting just last Sunday in an attempt to injure police officers and burn down a building.

But there’s a sense that momentum is growing.

And if that momentum does grow, sparked by the disappointment, shock, and anger of Best’s resignation, it just may save the city of Seattle.

How? By embarrassing and shaming the City Council into reining in its own out-of-control activism and forcing it to listen to the majority of Seattle citizens, not the fringe minority.