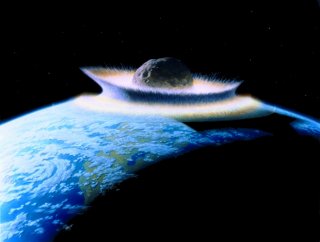 Few geological events fascinate as much as the one that happened 66 million years ago. Evidence suggests a huge asteroid hit our planet, triggering a chain of events that led to a mass extinction in which more than 70% of species on Earth – including the dinosaurs – disappeared.

A new study narrows down the trajectory of this asteroid, which could help us better understand how the impact affected the planet beneath it and how material was dispersed in its aftermath. The research suggests that the angle of impact of this asteroid may have led to the worst possible consequences for Earth’s inhabitants.

The asteroid is long gone – pulverised when it hit Earth – but it left a 200km-wide crater. By looking at the geometry and structure of this crater, it is possible to test asteroid trajectories with computer simulations and see which one is more likely to leave a scar as observed in real life.

The crater is no longer visible, it is buried beneath hundreds of metres of sediment deposited since the impact. But various pieces of evidence pointed geoscientists to the Yucatán Peninsula in Mexico as the site of the crater’s location, and it was named after a local village, Chicxulub. Various datasets have since been collected to allow researchers to appreciate the features of this crater.

In 2016, I joined a joint scientific expedition organised by the International Ocean Discovery Program and the International Continental Scientific Drilling Program. We spent two months at sea, drilling samples from the crater in a specific location, its peak ring.

Peak rings are formed during large impact events. The one in the Chicxulub crater consists of a roughly 80km-diameter inner ring of hills, effectively forming a second circle within the crater. Peak rings are more easily observed on other rocky bodies in our solar system, such as the Schrödinger Crater on the Moon.

Our 2016 expedition aimed at understanding how these features form, and what happens to the target rocks during an impact. It is difficult to produce experiments that replicate the high pressures, temperatures and aftermath of asteroid impacts events. That is why researchers use computer simulations.

The samples recovered during the 2016 expedition helped to refine models of how the peak ring, and ultimately the Chicxulub crater, was formed. For an asteroid that arrived vertically on the surface, the model suggests the object would have been pulverised within the first minute while making a cavity roughly 30km deep.

During the next two minutes, the bottom of this cavity was thrust up by the resulting forces to to a height of more than 10km. Then during the following two minutes, this uplifted central part of the cavity collapsed outward, forming the peak ring. In fact, the impact was so powerful it even brought up part of the Earth’s mantle, the layer below the surface crust found more than 30km deep underground.

The new study from researchers at Imperial College London, published in Nature Communications, pushes the modelling even further. By testing different asteroid sizes, speeds and angles of impact – 90° (vertical), 60°, 45° and 30° relative to Earth’s surface – it is possible to simulate which scenario would have left a crater that looks like the real one.

The shape and continuity of Chicxulub’s peak ring suggests that the actual asteroid had an angle of between 60° and 45°. If the peak ring was truncated somewhere (like a horse-shoe), that would suggest a shallower angle, but it does not seem to be the case. The direction of the asteroid is more challenging to estimate.

Regardless of the direction, the actual angle is pretty important to picture what happened after the impact. The estimated range of angles, and especially 60° relative to Earth’s surface, would have led to the most efficient vaporising of the rocks and projection of toxic gases and particles evenly in the region and globally.

Other simulations suggest that a 60° to 30° range would have released much more gas and many more projectiles than with a vertical (90°) or a shallow (15°) angle. This suggests that not only did the asteroid fall in a spot more likely to release toxic material, but it also did so very efficiently, leading to the worst-case scenario for our planet – and the dinosaurs.

A previous study suggested that a shallower angle and a different direction would have meant the effect of the impact was more severe in the northern hemisphere. Under the new model with a steeper angle, the ejected material would have been spread more evenly. This might allow researchers in the future to revise the wider record of the impact to better reconstruct the events that happened in its aftermath.

Erwan Le Ber is a Research Associate at the International Ocean Discovery Program, University of Leicester.