Distributed Warfare: How the U.S. Navy Will Win Against China? 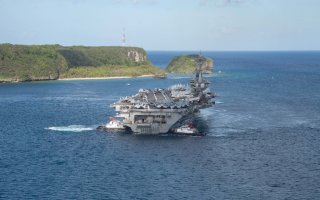 Here's What You Need to Remember:  This effort, which has already been quite successful to a large extent, was intended to better arm the surface fleet with new weapons for the specific purpose getting ready for major power warfare.

Distributed Maritime Operations, in part due to its emphasis upon networking and disaggregated warfare formations, is naturally intended to expand into a multi-domain operations paradigm. For example, the Carrier Strike Group Live Fire Exercise in the Indian Ocean can complement ongoing B-1 bomber missions have also been operating in India. Together these operations create a circumstance wherein maritime offensive maneuvers could be preceded or followed up with specifically tailored B-1 bombing missions against China during a theoretical future war. For example, B-1s could help soften the battlefield for carrier-launched F/A-18s conducting high-speed hit and run attacks from the sea.