Do We Really Want the Government to Decide How Twitter Is Run? 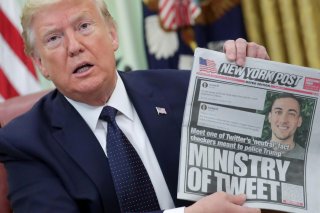 It might be the most important federal law that you’ve never heard of. Section 230 of the 1996 Communications Decency Act protects internet companies from the actions of their users and allows them to moderate content. As Jeff Kosseff, assistant professor of cybersecurity law at the US Naval Academy, writes in “The Twenty-Six Words That Created the Internet,” that seemingly simple provision “created the legal and social framework that we know today.” And as Kosseff added in an interview with me last year, “I can’t think of any other single law that has had more impact on the internet as we know it today.”

No Section 230? Well, you can probably forget about an internet that’s heavily driven by sharing and user-generated content. Definitely a blander and more boring place to visit. More one-way communication. Any effort to significantly change or limit this legal protection — as President Trump apparently wants to do — should require a really good reason.

But the supposed suppression of “conservative” speech by social media companies such as Facebook, Twitter, and YouTube doesn’t qualify. See, there’s no evidence that such censorship is happening in any sort of systematic or substantial way. My review of the studies (here and here) of this issue inform this view, as do my own investigations. Anyone who’s spent any time on social media knows it doesn’t lack for a diversity of opinion.

And keep in mind that the pro-Trump “conservatives” who get banned from social media are hardly a collection of flat-taxers and budget balancers. One study that purported to find an anti-conservative bias in Twitter account suspensions actually seems to have discovered a bias against white supremacists who happen to support the president.

But there’s a more basic point: The companies are private actors, not arms of the state subject to the First Amendment. If Mark Zuckerberg or Jack Dorsey wanted to make their companies Trump-free or Biden-free zones, it’s up to them, although such moves would be financially suicidal while creating a fantastic opportunity for other entrepreneurs. They don’t need to somehow be politically neutral to moderate content — much less be subject to partisan political oversight in Washington.

Given the political and legal difficulties of this effort to crack down on social media, one has to wonder what the intention of this effort is. Perhaps the goal is to “work the refs” or chill content moderation efforts that sometimes hurt Trump-friendly accounts. Indeed, it’s already working. Check out this from a Wall Street Journal story this week on how Facebook has been reluctant to implement measures to make the site less polarizing: “Another concern … was that some proposed changes would have disproportionately affected conservative users and publishers, at a time when the company faced accusations from the right of political bias.”

Learn more: Social media companies don’t have to be politically neutral if they want to moderate content | Jeff Kosseff on the twenty-six words that created the internet: A long-read Q&A | Trump pushes Big Tech bias issue harder than the evidence supports

This article by James Pethokoukis first appeared in AEIdeas on May 28, 2020.