Do You Know Which U.S. Presidents Have Served In the Military? 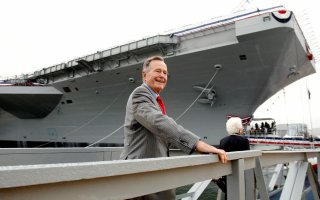 Here's What You Need to Know: Not all Presidents were veterans, but being a veteran certainly gave them a leg up in the polls.

Since the National Security Act of 1947, that has also been understood to mean all United States Armed Forces. Yet, the exact degree of the authority that the Constitution actually grants POTUS has been the subject of debate, especially in recent years.

And while the president need not have actually served in any branch of the military, a veteran could have a leg up in future elections. According to 2016 Pew Research Center survey found that 50 percent of Americans would be more likely to vote for a candidate with military experience.

To date, twenty-nine presidents served in the military and a dozen were even general officers.

Every school child knows—or at least should know—that George Washington was the first president of the United States (POTUS), and a few may even know that Washington led the Continental Army to victory in the American Revolution. Washington was a true “military man” as he had previously served in the Virginia Militia during the French and Indian War.

As a young officer Washington’s career could hardly be called illustrious however—he was forced to surrender to the French at Fort Necessity. He redeemed himself at the Battle of Monongahela and helped save the British Major General Edward Braddcock’s column of 2,100 British and 500 colonial militiamen from defeat. Washington later led the Virginia Regiment in the efforts to capture the French-held Fort Duquesne. Yet, throughout the campaign Washington was unable to secure a more prestigious royal commission in the British Army, and at one point became an unpaid, volunteer aide-de-camp to Braddcock rather than assume a militia rank, which was looked down upon by British officers.

Surprisingly Washington was just one of two of our nations “Founding Fathers” who saw service in the American Revolution and went on to be POTUS—the other being James Monroe. The fifth president served as an officer in the Continental Army and reached the rank of major. Monroe was severely wounded at the battle of Trenton—and he notably appears in John Trumbull’s painting that depicts the capture of the Hessians at the battle with Monroe fittingly pictured next to his friend George Washington.

Many Officers and Gentlemen

Nearly all of the twenty-nine presidents who served in the military were officers, with the exception being James Buchanan. He served as a private in Henry Shippen’s Company, 1st Brigade, 4th Division of the Pennsylvania Militia, and participated in the defense of Baltimore during the War of 1812.

Eisenhower has the distinction of also being the only president to reach the rank of “Five Star General.” Yet it should be noted that Grant was promoted to the rank of General of the Army at the close of the Civil War. At the time it was a four-star rank, but when it was created again during the Second World War it was as a five star rank, while today’s Four Star General is known simply as general.

The War of 1812 and the Presidents in Uniform

Only two Founding Fathers may have actually served in the military during the Revolution, but five presidents following in succession saw service during the War of 1812.Those included W.H. Harrison, Tyler, Taylor and Buchanan—but that war has forever been linked to Jackson, who led American forces to victory at the Battle of New Orleans in 1815.

The battle, which was notable in that the Americans defeated a larger professional British Army, was actually fought before news of the signing of the Peace Treaty of Ghent could reach America. However, the Battle of New Orleans ensured American control of the Mississippi River.

It should also be noted that Jackson’s military career began when he was just thirteen years old. As a teen he served as a messenger for a militia unit during the American Revolution. So it could be argued that three presidents took part in the revolution, but at a young age no one would suggest Jackson was a Founding Father. Moreover, during this “colorful life,” Jackson fought a total of 103 duels—however killing only one man.

Seven future presidents served in the military during the American Civil War, as well as former President Millard Fillmore, who commanded the Union Continentals, a corps of home guards in upstate New York. That unit, which was made up of men over the age of forty-five, trained to defend the Buffalo area in the (very unlikely) event of a Confederate attack. The unit did perform military drills and ceremonial functions at parades and funerals for soldiers killed in battle.

Notably, the Union Continentals also guarded President Abraham Lincoln’s funeral train in Buffalo. The unit continued to serve in a ceremonial role after the war and Fillmore remained active with the Continentals almost until his death in 1874.

Only World War II saw more presidents in uniform than the Civil War—and future Presidents Eisenhower, John F. Kennedy, Lyndon B. Johnson, Richard Nixon, Gerald Ford, Jimmy Carter, Ronald Reagan and George H.W. Bush all served their country. Ike was the only one to reach the rank of general.

As for other conflicts, Pierce saw service in the Mexican-American War, while Lincoln was a captain in the Illinois State Militia during the Black Hawk War. Harry S. Truman was an artillery captain during the First World War and saw action in the Argonne Forest.

Two future presidents were in the military, but saw no service. That included George W. Bush, who served in the Texas Air National Guard during the Vietnam War; while James Polk, who served as a colonel in the Tennessee State Militia.

To date, only one President has been awarded the Medal of Honor (albeit it posthumously). That was Theodore Roosevelt, who famously led the 1st United States Volunteer Cavalry—famously nicknamed the “Rough Riders”—at the Battle of San Juan Hill in Cuba during the Spanish-American War. Roosevelt, who resigned his post as Assistant Secretary of the Navy, formed the unit and was determined to see battle.

On January 16, 2001, more than 103 years after the charge up Kettle Hill, President Bill Clinton presented the Medal of Honor to Teddy Roosevelt’s great-grandson Tweed Roosevelt.

Peter Suciu is a Michigan-based writer who has contributed to more than four dozen magazines, newspapers