Does America Spend Too Much or Too Little on Defense? 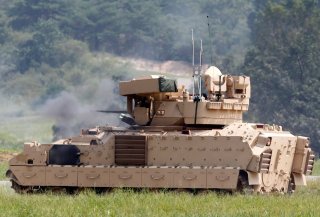 Here's What You Need To Remember: The politics and priorities of the defense budget are subject to intense debate and controversy. Who is calling the shots and what is the right force posture?

Our military is faced with a conflicting dichotomy. On one hand, we tout that we are the most technologically advanced military force on the planet. On the other, the Pentagon states that we need to upgrade our defenses to keep up with the looming threats. Depending on which briefing you attend, you may hear that the Department of Defense (DoD) is operating under a very tight budget; meanwhile, the news media points out the United States spends more on defense than any other nation in the world.

So what gives? What is really happening?

To fully grasp the intricacies of the U.S. military’s budget and expenditures, we must take a holistic look at the budgetary process.

Who’s Really in Charge of the Military?

Each year, the service components draft their needs and submit them in a prioritized list to the Secretary of Defense. These lists are consolidated and given over to the president. The president, not being a military man, relies on the suggestions and vision of the service chiefs. In January of every year, the president submits his budget proposal (for the next year) to Congress.

This begs the question: who determines what the U.S. military will be comprised of? Sadly, it appears that the commander-in-chief merely makes recommendations; it is the Congress who has the final say.

Unfortunately, two flaws can be spotted in this system. First, it may be possible that a member of Congress may skew military appropriations in order to curry favor with their constituents. For example, Senator Susan Collins from Maine successfully petitioned to build the third Zumwalt-class destroyer to keep her state’s Bath Iron Works shipyard in business; at the time, it was a ship the Navy did not want. Second, once the appropriations are issued, it becomes a monumental fight to change them. What if a service realized that they need to change what they are purchasing because of a new threat? It would face the huge task of convincing Congress of the need to change the purchasing strategy mid-stream. It may prove more difficult than the effort itself.

The Push for Technology

There’s a consensus among military analysts that posits the technological advantages of our adversaries. They assert that Russia and China have already surpassed the United States in terms of technological abilities. In these analyses, they credit foreign missiles with absolute reliability and perfect accuracy while discrediting our own.

This trend has spurned the admirals and generals into action; there is a palpable emphasis in developing futuristic weapons to not only meet the challenge, but to far exceed it. At this point, I will concede that there is value in developing weaponry for the future. However, I will dispute the overwhelming emphasis currently placed upon it. If one is focused on a futuristic battle, you may not be prepared for the near-term skirmish.

The DoD budget for Fiscal Year 2021 stands at $738 billion in total. Of that, $104.3 billion is being spent on Research, Development, Testing, & Evaluation (RDT&E); this is the highest value in our country’s history. This money will be spent on the development of weapons that do not yet exist. Items such as laser rayguns, howitzers with global reach, and deflector shields sound good in theory, but the technology isn’t mature enough to make them a reality.

Each service component has a number of pet-projects that are purely hypothetical at this point: the Air Force’s B-21 stealth bomber concept boasts unmatched abilities, when it hasn’t even flown yet; the Navy’s electromagnetically driven catapults and elevators still haven’t proven their worth; the Army’s search for a robot that can autonomously carry an infantryman’s load hasn’t reached fruition; and all of the services are constructing massive databases to help each keep track of maintenance and availability at extreme cost.

The Value of Our Current Force

Right now, the U.S. military is, by far, the strongest force on the planet. Let’s review recent history.

In 1991, the U.S. military dismantled the Iraqi army in 96 hours. Later, in 2003, the US military crushed the Iraqi army in less than weeks, while using only two divisions as the spearhead. In Afghanistan, the U.S. military forced the Taliban government to fall within three months. Since that time, the United States has held control of Afghanistan longer than the Russians or Alexander the Great ever did.

Those are astounding time frames. But like any sports team, all the competitors would like to defeat the champion and claim the title. So, the United States must be vigilant to keep the hyenas at a distance. Because of that, I propose that Washington maintain its current force as its primary effort, while slowly developing its future capability as a secondary effort.

For a moment, let’s set aside the on-going technological revolution. The major weapons systems in the U.S. arsenal are sound, combat-proven, and worthy of keeping. Sure, they will require upgrades to keep pace with technological developments, but they are largely superior to most nations’ weapons. Our weapons systems cannot be allowed to fester or grow obsolete while we chase new futuristic weapons that are years from production. Former Secretary of Defense Donald Rumsfeld once said, “You go to war with the army you have, not the one you might want or wish to have at a later time.”

The reality is that new weapons are prohibitively expensive and take too much time to build; because of the costly price tags of the new weapons, the Pentagon invariably ends up buying fewer new weapons and ends up lagging behind our adversaries in terms of the sheer total number of systems; during these extensive construction times, we must maintain our current force structure by funding the “in-place” weapons systems.

Political doves often create conspiracy-laden theories that accuse the most outlandish plots. One of them touts that the average citizen does not truly comprehend how much the weapons manufacturing industries fuel the U.S. economy overall. True, the military-industrial complex affects many jobs in many states, but the funding of programs just to create “jobs” eventually hurts the military. It is sometimes necessary to cancel a project and shift its money to another more worthwhile project. This may hurt some Congress-members, and it may mean shifting funding to another defense company, but in the end, the United States will benefit from the security gained from a good piece of military hardware.

To unravel the convoluted budgetary process and streamline defense acquisition, the president should request a special meeting with both Congressional Armed Services Committees to appeal for one-time special monetary powers to shift defense spending toward ‘at risk’ military capabilities. Funds would have to be shifted on an emergency basis, with the aim of purchasing the best items now rather than perfect items far in the future. The president should propose:

1) The RDT&E value should be reduced by 10 percent for one year. Research could still continue with the remaining $93.9 billion, although some delays could be expected. The $10.4 billion could be used elsewhere.

2a) Purchase another eight F-15EX fighters for $1.2 billion, as the Air Force did last year. This would serve to augment the F-15 fleet during the slow expansion of the F-35 acquisition.

2b) Along a similar vein, initiate the purchase of sixteen F-16V Block 72 fighters for $1.3 billion. Just the addition of the AN/APG-83 Scalable Agile Beam Radar (SABR) will be a great improvement of the Viper’s potential, given that the F-16 will still be flying beyond 2030.

3) Purchase another Virginia-class Block V submarine with the additional Virginia Payload Module for $2.75 billion. This would help in the Navy in two ways: the VPM capability will assist with the aging SSGN line of ships, which will retire soon; it will bring up the submarine production schedule, which had slowed over the last two years. This will alleviate concern of the shrinking attack submarine numbers. Further, insist that all future acquisition of Virginia-class attack submarines be equipped with the VPM missiles to ameliorate the retirement of SSGNs.

4) Disburse $1 billion to change the structure/composition of the Littoral Combat Ship. To date, twenty LCS ships have been laid down. These ships are misfits within the Navy, not truly fulfilling any particular mission. The president should insist that the remaining ships in the class (fifteen hulls) be re-configured as mini-arsenal ships. Using the current hull design, the super-structure would have permanently installed VLS systems to house the Naval Strike Missile, the Harpoon Block 1C anti-ship missile, the Standard Missile 2 missiles or the Standard Missile 6; all of these guided by the SPY-1F Aegis radar; however, this would most likely eliminate the helicopter landing pad in the stern of the ship. In short, the last fifteen LCS ships would be turned into offensive weapons systems and serve as an interim frigate until a new ship design is introduced.