Does Biden Have a Plan for North Korea? 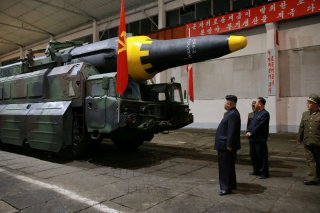 Key point: The reactor at Yongbyon and a nearby radiochemical laboratory represent the only publicly known facilities in North Korea that produce plutonium for nuclear weapons. A resumption of activity at the Yongbyon reactor is therefore a strong indicator that North Korea is following through on Kim Jong Un’s January orders to improve the country’s nuclear arsenal.

North Korea restarted a reactor at the Yongbyon nuclear complex according to a new report by the International Atomic Energy Agency (IAEA). The reactor, which has been dormant since December 2018, produces plutonium for North Korea’s nuclear weapons. The amount of plutonium the reactor will eventually produce is currently unclear, but a resumption of activity at the Yongbyon nuclear complex should not come as a surprise.

North Korea has not been a major foreign policy concern thus far in the Biden administration’s tenure. This is understandable given the administration’s efforts to end the U.S. military presence in Afghanistan, the COVID-19 pandemic’s resurgence, and the lack of North Korean provocations. However, a lack of attention does not mean a lack of activity.

A couple weeks before Biden’s inauguration, Kim Jong Un made an important report to the 8th Party Congress that set the priorities for his regime over the next several years. Kim’s report mentioned several improvements to North Korea’s nuclear forces, including making better versions of capabilities that were already tested and developing new capabilities such as low‐​yield warheads. The reactor at Yongbyon and a nearby radiochemical laboratory represent the only publicly known facilities in North Korea that produce plutonium for nuclear weapons. A resumption of activity at the Yongbyon reactor is therefore a strong indicator that North Korea is following through on Kim Jong Un’s January orders to improve the country’s nuclear arsenal.

The Trump administration had an opportunity to prevent this reactor restart from happening. North Korea paused activity at the reactor in December 2018 in the lead up to the February 2019 summit meeting between Trump and Kim in Hanoi. Yongbyon was one of the items that Kim was prepared to negotiate about at the summit. Reportedly, North Korea offered to scale back its activities at Yongbyon in exchange for sanctions relief, though the exact scale of what Kim was willing to give up (e.g. complete dismantlement or just a freeze of activities) is unclear. Trump and his negotiating team thought the deal was not good enough and tried to push a “more for more” solution that Kim turned down, and U.S.-North Korea nuclear diplomacy has been stuck in a stalemate ever since.

To its credit, the Biden administration is trying to engage North Korea in working level talks, although Pyongyang has not responded to these overtures. Biden’s desire to chart a middle path between the Obama administration’s “strategic patience” and Trump’s leader‐​to‐​leader summit diplomacy is well intentioned, but the Yongbyon reactor activity shows that North Korea will not sit on its hands. Kim Jong Un is not eager to re‐​run the nuclear crisis of 2017 in the near future, but in the absence of diplomatic progress he has made it clear that he will continue improving and growing the nuclear arsenal.

If it wants to prevent any further improvements to North Korea’s nuclear forces, the Biden administration will have to play a bolder diplomatic game. A return to maximum pressure might be an attractive political option, especially if the White House wants to look tough after the botched withdrawal from Afghanistan. Biden must take care to resist such an impulse. The extended nuclear crisis of 2017 demonstrates that North Korea will repay pressure with pressure. Diplomacy with North Korea is therefore the best option for reducing nuclear tensions, but any breakthrough will likely require a bolder approach than continued insistence on working level negotiations.

Hopefully such a breakthrough will happen before North Korea has the time to use its newly produced plutonium to create a new generation of nuclear weapons.