Does DC's Mayor Really Want To Get Rid of the Washington Monument? 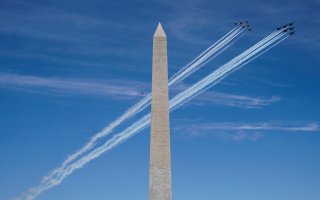 When D.C. Mayor Muriel Bowser earlier this year created an advisory group to scrutinize the city’s monuments, memorials, and facilities for their “disqualifying histories,” the outcome of its feverish deliberations was utterly predictable: It would launch an assault on the most cherished and unifying symbols of American democracy.

Like the militant Jacobins of revolutionary France, the leftist radicals leading this movement for “racial justice” see enemies everywhere.

Christopher Columbus, Benjamin Franklin, Andrew Jackson, Thomas Jefferson, George Mason, George Washington—all would be swept up in their frenzied attempt to cleanse the land of anyone linked to slavery, “systemic racism,” and the mistreatment of women and the LGBTQ communities.

Yes, the Washington Monument—towering over the city to honor the man considered “first in war, first in peace, and first in the hearts of his countrymen”—makes the list of offenders.

The District of Columbia Facilities and Commemorative Expressions committee is recommending that the federal government “remove, relocate, or contextualize” about 1,300 “assets,” including statues, public schools, libraries, parks, and roads.

In the committee’s letter to Bowser, one can detect echoes of Robespierre’s Committee for Public Safety: It praises the summer of 2020 for the “winds of change” and “unprecedented levels of activism.”

But there is no hint of the breakdown in law and order that has jarred the nation’s capital over the last few months: the mob violence, the assaults on police, the desecration of monuments, the attacks on local businesses, and the intimidation of D.C. residents who refuse to raise their fists in solidarity with Black Lives Matter activists. Instead, the chaos is cast as “the battle for inclusion, equality, and justice.”

But the mayor and her underlings are fighting a phony war, a distraction from the failures of leadership that have plagued Bowser and other progressive mayors around the country. Washington is a city in crisis, as any longtime resident—including this author—can attest.

There is a palpable mood of anxiety and fear. Businesses remain shuttered. Mob violence has become a weekend ritual. A mass shooting in August that wounded 21—and killed a 17-year-old boy—marked a 45% spike in shootings over the same period last year.

As of today, the city boasts 128 homicides, with no sign that the mayor or police have a strategy to bring it under control. Meanwhile, deaths from opioid overdoses continue to skyrocket.

The dropout rate for the city’s high school students increases every year, topping 30% in 2019. As neighborhood leaders working with at-risk families will quietly explain, these problems have nothing to do with racism and everything to do with failed government programs and the breakdown of the family.

Instead of facing these present realities, the mayor and her minions have focused their energies on reimagining the past. Like the French Jacobins who renamed city streets to purge them of any Christian references, their purification campaign targets no fewer than 78 streets named after “persons of concern.”

But the persons who should concern us most are those who seek to delegitimize the American Founders: the radicals and fanatics whose self-righteous rage blinds them to the achievements of a democratic revolution that has liberated millions and promoted freedom and equality around the world.

Joseph Loconte, Ph.D., is the director of the B. Kenneth Simon Center for American Studies at The Heritage Foundation.

This article first appeared at The Daily Signal on September 2.