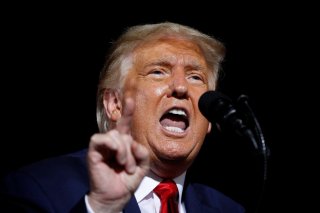 Even before Donald Trump was elected US president in 2016, researchers who study democratic backsliding, the rise of authoritarian regimes and their policies, feared his “America first” agenda would pose a serious threat to democratic norms and the rule of law.

In office, the president repeatedly refused to commit to accept the results of the election. He has called for criminal prosecution of his political enemies, criticised judges for ruling against his administration and rewarded his political allies with pardons when they broke the law.

In a recent article in the Journal of Human Rights, we reviewed a wide array of evidence about the Trump administration’s apparent threats to various international commitments as well as democratic rule. We show how Trump’s America first policies have directly undermined the international human rights regime.

While critics of US foreign policy have argued before that the US often falls short in upholding human rights, the current moment is particularly fraught.

Trump’s America first agenda, and especially his administration’s overt transgressions against many longstanding international norms, has damaged America’s global reputation. The Trump administration barely pretends to care about human rights in comparison with other priorities. This both directly undermines human rights protection in the US and emboldens other world leaders to violate human rights.

Consider Trump’s reaction to the conclusion by US intelligence agencies that Saudi Arabia’s leadership had ordered the murder of Washington Post journalist Jamal Khashoggi in the Saudi consulate in Istanbul, Turkey. Trump explained why he continued to back Saudi Arabia: “It’s all about ‘America First’. We’re not going to give up hundreds of billions of dollars in (arms) orders.”

Even before his election, Trump was advocating policies in contravention of long-established international norms. During his 2016 campaign, he infamously called for the use of torture against terror suspects, which is unconditionally prohibited by international law.

As president, Trump has followed up by pardoning various war criminals, including soldiers convicted of brutal acts, which military legal scholars argue “can encourage criminal behaviour with anticipated impunity on the battlefield”.

Conventions out the window

Perhaps even more problematically, the US now acts in a manner that directly and openly transgresses major human rights accords. It is also very much an outsider to the main international human rights institutions.

The 1951 Refugee Convention explicitly bans discrimination based on “race, religion or country of origin”. However, the administration notoriously implemented a travel ban, which also affected refugees, based on Trump’s repeated call for a Muslim ban.

Broader hostility to immigrants and refugees were also cruelly reflected in a widely condemned policy to separate family members from one another – effectively locking children in cages. In June 2018, the day after the UN High Commissioner for Human Rights dubbed the US family separation practice “government-sanctioned child abuse”, the Trump administration withdrew from the organisation, decrying its politics.

The Trump government ratcheted up US hostility to another major institution, the International Criminal Court (ICC), apparently for having the audacity to consider possible violations of human rights by the US. In March 2020, an ICC prosecutor was given the go-ahead to launch a formal investigation of war crimes in Afghanistan, potentially including acts committed by US personnel. When the Trump administration retaliated in June by imposing vindictive economic sanctions and visa restrictions on court personnel, it explicitly referenced America first.

Some of Trump’s most troublesome practices concern his uncomfortable veneration for an array of autocrats and tyrannical regimes. Over the years, Trump has openly admired North Korea’s Kim Jong-un, Russia’s Vladimir Putin and China’s Xi Jinping for their authoritarian policies.

Trump’s words and deeds often seem to emulate their behaviour. He uses authoritarian rhetoric to refer to the media as “the enemy of the people”, and has called Democrats un-American and treasonous for opposing some of his policies.

During Black Lives Matter protests in early June 2020, federal law enforcement officials dispersed a peaceful protest near the White House with chemical gas and rubber bullets. Trump urged US governors to “dominate the streets” and cheered the use of “overwhelming force” on Twitter. He also repeatedly promised to send in the military to quell domestic “insurrection.”

As one of us, Kurt Mills, has argued elsewhere, we are also unsettled by overt US efforts to redefine and strictly limit the global human rights agenda. The Commission on Unalienable Rights, created by US secretary of state, Mike Pompeo, has argued for a narrow understanding of human rights, prioritising what it called “natural rights” such as religious rights. This is at odds with the international consensus on rights, and could greatly reduce protections for many groups of vulnerable people, including LGBTQ people.

In contrast to some past American human rights transgressions, these Trump administration’s violations are public and performative. They send worrying signals about US identity.

If Americans re-elect Trump in November, it will send a strong message to the world that the US does not prioritise human rights, the rule of law and democracy. This could have devastating consequences both at home and abroad. Domestically, rights will continue to be undermined and constrained, while human rights abuses around the world will be implicitly sanctioned, making it harder for human rights advocates to challenge these abuses.