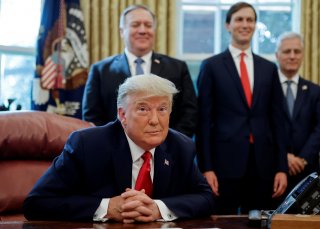 The Trump administration has finalized plans to release a new rule allowing one class of dishwashers to clean a load in less than an hour.

Dishwashers on average take about two and a half hours to wash a load of dishes because of government regulations, more than twice as long as it took the appliances to clean plates, glasses, utensils and other items a generation ago, according to data from Competitive Enterprise Institute, a free-market think tank.

The Energy Department finalized the rule Monday, and the actual regulatory text will be posted in the Federal Register by the Department of Energy in two weeks, according to administration officials.

“President Trump has once again made good on his promise to free Americans from ludicrous government regulations—this time bringing a commonsense reform to dishwashers,” Office of Management and Budget Director Russ Vought said in a public statement. “Dishes now washed in an hour or less! This is yet another example of President Trump’s promises made, promises kept on deregulation.”

The Department of Energy received a petition from the Competitive Enterprise Institute to define a new class of products under the Energy Policy and Conservation Act for residential dishwashers.

The new product class would cover dishwashers with a cycle time, for the “normal” cycle, of less than one hour from washing through drying, according to the Office of Management and Budget.

The Energy Department published the petition and request for comments in the Federal Register on April 24, 2018. The department granted the petition for rulemaking and proposed the new product class.

The Energy Department will consider appropriate energy and water use limits for such a product class, if adopted, in a separate rulemaking, according to OMB.