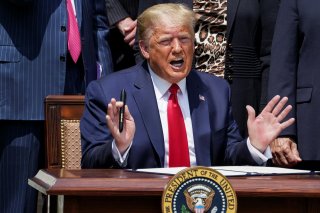 One of my favorite regular updates on social media is when New York Times technology columnist Kevin Roose tweets the top Facebook stories of the day. And consistently those stories come from sources that are conservative, Republican, or otherwise pro-Trump. Always a lot of Fox News stories, for instance.

This reality is something I tend to think about when folks on the right get exercised about supposed anti-conservative/GOP/Trump bias on social media. Of course, there’s plenty of other evidence suggesting these accusations are vaporous. (I write about that evidence here, here, here, here, and here.) And there’s a new bit of analysis from CrowdTangle, a data analytics firm owned by Facebook, as reported here by CNN:

Over the last month on Facebook, Trump has captured 91% of the total interactions on content posted by the US presidential candidates, according to CrowdTangle. Biden has captured only 9%. … Over the last month, the top performing news organization in the US was Fox News, a conservative network which largely echoes the Trump White House’s messaging. Fox News captured 13% of all interactions among US news organizations with more than 29 million likes, comments, and shares, according to CrowdTangle.

The second top-performing page belonged to Breitbart, a right-wing website that is largely supportive of the President and has close ties to the White House. Its Facebook page accounted for 9% of the total US media interactions over the last month with more than 20 million likes, comments, and shares. The third best performing US news organization was CNN, with 7% of the interactions; the fourth was ABC News with 5%; the fifth was NPR with 4%. When sorting by US political media, the data skews largely in favor of conservative news organizations, according to CrowdTangle. Six of the top 10 US political media pages belonged to conservatives.

I find it hard to believe that anyone spending any considerable amount of time on Facebook would be startled at these results. They sure seem intuitively correct. Yet until now that disconnect between perception and reality wasn’t so important. People believe all sorts of weird things that might not be supported by much evidence.

But suddenly that disconnect is pretty important. Charges of bias are fueling President Trump’s call to repeal Section 230 of the 1996 Communications Decency Act. (Joe Biden and many Democrats don’t like 230, either, but their concern is the spread of misinformation.) It’s the provision of internet law that protects internet companies from the actions of their users and allows them to moderate content. And it’s hardly an overstatement to say Section 230 has provided the regulatory framework of the US digital economy.

In a new essay, Brent Skorup of the Mercatus Center warns conservatives about the risks of revoking Section 230. From that piece:

The fact is, Section 230 is in trouble. … At some level the President and his advisors know that opening the door to regulation of the Internet will end badly for right-of-center and free speech. This was the foundation of the President’s opposition to Title II net neutrality rules. … The Executive Order, while it doesn’t allow the FCC to regulate online media like Title II net neutrality did, is the Administration playing with fire. It’s essentially a bet that the Trump administration can get a short-term political win without unleashing long-term problems for conservatives and free speech online. … Prominent Democrats are calling for the elimination of Sec. 230 and replacing it with a Fairness Doctrine for the Internet. If things go Democrats’ way, the Executive Order could give regulators, much of the legal establishment, and the left a foothold they’ve sought for years to regulate Internet services and online speech. Be careful what you wish for.

This article by James Pethokoukis first appeared in AEIdeas on June 3, 2020.