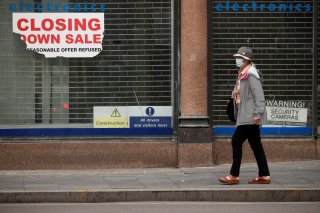 Governments are all deciding which struggling companies to help out in the COVID-19 pandemic. Among the many looking for help, some have a strange deathly pallor.

This is nothing to do with whether they trade in sectors whose futures look very uncertain – though many do. For years, these companies have been struggling to pay the interest on their large debts, let alone the principal, despite the long period of very low interest rates. Some were on their way to failure. The buoyant economy before coronavirus kept them just about stumbling along.

There are many of these zombies in our midst, and whatever public money they receive means less available for firms that were healthy before the pandemic. Morgan Stanley estimates that as many as 16% of US companies are zombies, while there are plenty in Asia and Europe too.

Various countries have given financial aid to the private sector in recent months, including extending credit and grants to companies. More aid is likely on the way. As more and more companies run into trouble, governments will have to decide when and how to step in.

Even in better times during the last three years, US bankruptcies averaged 23,000 firms per year. Some of them may have failed because of zombie firms, since research suggests they crowd out credit from other candidates even in the best of times

In normal circumstances, however, business failures are actually good for society – tragic as they are for business owners and their employees. The victims are able to take risks and try new things, without which there can’t be progress. This “creative destruction”, as the Austrian economist Joseph Schumpeter described it, is a necessary part of capitalism. Governments and central bankers rightly fight the effects of recessions on citizens – this year’s cash payments to American workers would be an example – but recessions are often necessary corrections to over-exuberance in business.

So while the pandemic is very unusual, in one sense we must view it like any recession. For this reason, governments don’t need to worry about the business failure rate but about the excess failure rate – for example, US bankruptcies hit around 60,000 firms in 2010, so that may be a useful yardstick this time around.

The US government, among others, has left itself open to propping up zombies by offering emergency relief to all struggling businesses, regardless of their financial picture before the pandemic. The rush of American small businesses to access funding illustrates how quickly money can move in the wrong direction. It demonstrates the need to think out the rules carefully in advance.

It would have been smarter to focus on mechanisms that choose between struggling businesses. Whereas under the emergency relief programme, banks lend to any business knowing the government will cover the debts, one option for the future is to just to stimulate bank lending and let banks choose who to lend to. This way they have skin in the game and the weak can be allowed to fail.

Another option would be to let vulnerable companies work themselves out in the normal bankruptcy reorganisation process (Chapter 11 in the US, administration in the UK). For example, the biggest US airlines spent almost all their free cash flow on share buybacks over the last decade, sometimes going heavily into debt to do so. This benefited their shareholders and bondholders, so it’s appropriate that they take the hits. Once a company has been reorganised, government aid could then be made available to prop up the “good” parts that remain.

Some will argue that certain firms are too big to fail. Japan resisted letting their big companies die in the “lost decade” of the 1990s, but when it did the economy improved. South Korea had a similar experience with Daewoo.

Some have tried to make the same argument about Virgin Atlantic being too big to fail today. A look at the financials suggests the UK government was likely correct to initially reject its request for £500 million in state aid, especially as Virgin had not tried to seek investments from other sources.

The airline lost money in 2017 and 2019 and warned a year ago that it would not make a profit for at least another two years because of Brexit and high fuel costs. Owner Richard Branson is now trying to put together private funding of around £450 million on the basis that he can then reapply for government assistance. He shouldn’t be given that assistance. In any case, it may be unnecessary if he sells some of his other business interests.

One country that has some protection against zombie firms is Germany. Before a company can receive funding from state-owned German bank KfW, the authorities must be satisfied that it was in solid shape before the crisis. This could be a useful model for other countries.

In short, the best way to help the economy is either to let zombie companies resurrect themselves through the bankruptcy process or just return to the grave. Yes, there will be economic pain if these companies fail – including job losses. But rather than providing government aid to these zombies, it might be better directed at their former employees. For example, the Swiss government is putting more money into unemployment insurance. Feeding zombies will just make the recovery longer and slower, crowding out more worthy enterprises and wasting resources.