Don't Mistake China's Economic Wavering for Weakness. It's Stronger Than Ever. 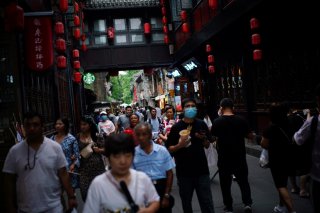 There’s an emerging view that China’s belligerent approach and “torching” of diplomatic relationships with the wider world is a sign of “insecurity and weakness”; that its economic growth is “unsustainable”; and that “everyone in the top ranks of the Chinese Communist Party” knows the day is coming when “China’s entire economic structure and strategic position crumbles”.

These views are drawn from an essay by Peter Zeihan entitled A Failure of Leadership: The Beginning of the End of China.

He describes himself as a geopolitical strategist whose work history includes a stint working for the US State Department in Australia.

He is hardly the first person to say these sorts of things, and I suspect he won’t be the first to be wrong about them, at least for quite a while.

That’s not to say he doesn’t draw on facts. China has been extraordinarily profligate in its use of capital, and has become progressively more so over the last two decades.

Paul Krugman (1994) famously made the same point about the then rapidly-growing smaller East Asian economies a few years before the Asian financial crisis in The Myth of Asia’s Miracle.

China is certainly laden with debt

Nor is there any denying that China has an enormous amount of debt relative to the size of its economy, especially for what is still in many ways a “developing” economy.

Debt as a percentage of GDP

But, and this is an important “but”, most of that debt is owed by state-owned enterprises to state-owned banks – which can be thought of as two entries on opposing sides of the same balance sheet, that of the People’s Republic of China.

If a lot of that were to turn “bad”, which is by no means impossible, then the ensuing “crisis” could be solved by writing it off, and then re-capitalising the state-owned banks by drawing down on the foreign exchange reserves of the People’s Bank of China.

China has actually done this twice before, in the late 1990s as part of the state-owned enterprise reforms pushed through by then-Premier Zhu Rongji, and again between 2003 and 2005, when the big four state-owned banks were “cleaned up” ahead of their very partial privatisation and listing on the Hong Kong Stock Exchange.

The “bad assets” were transferred into an entity called Central Huijin which subsequently became the nucleus of China’s sovereign wealth fund, the China Investment Corporation.

An unknown question is whether the People’s Bank of China’s foreign exchange reserves would be sufficient for what would now be a much larger task.

It lost one quarter of its reserves (almost US$1 trillion) defending its currency between June 2014 and December 2016, after which it imposed very strict controls on capital outflows, which have remained in force ever since and are easier to maintain in an authoritarian regime that knows how to deploy modern technology for surveillance purposes than in other countries that have resorted to capital controls such as Argentina.

But it is aware of the risks…

Since that time, the ubiquitous “Chinese authorities”, as they are usually referred to by Western economists, have been acutely aware of the risks to financial stability posed by the growth of so-called shadow banks and the way Chinese banks have become more dependent on wholesale funding and less on deposits; as US and European banks did, to a much greater extent, in the years leading up to the global financial crisis.

Another important reason has been that China’s working-age population peaked in 2014 and has since shrunk by almost 1.5%.

It also helps explain why the People’s Bank of China hasn’t done nearly as much monetary stimulus as it did during and after the financial crisis or in 2015-16.

There hasn’t been a significant acceleration in credit growth in recent months nor has there been a surge in property development or prices, as there would have been if the People’s Bank of China had unleashed another wave of credit.

China’s authorities are doing more fiscal stimulus than they did 12 years ago, although it is in different forms to the construction-intensive programs it implemented then.

The potentially most worrying development – albeit not from the perspective of the next year or so – is the one depicted in this chart, which shows a marked divergence between the level of foreign exchange reserves and the rate of growth in domestic credit.

For a fixed exchange rate system to be sustainable, the two ordinarily need to maintain a fairly close and stable relationship – which they do under a “currency board” like the one Hong Kong has had since 1984 (or that the Baltic states had before joining the euro, and which Bulgaria still has) where the monetary authority is explicitly precluded from issuing currency unless it is backed by foreign exchange reserves (or, in Hong Kong’s case, reserves plus the Land Fund).

China’s foreign exchange rate is of course no longer completely fixed, but rather is “carefully managed” around a peg to a trade-weighted index (as the Australian dollar used to be between 1976 and 1983).

But the People’s Bank of China’s capacity to maintain that peg is dependent on the credibility of its implicit promise to buy or sell its currency in whatever quantity is required to keep the exchange rate close to the peg.

…and good at limiting capital flight

Obviously China can sell its currency in whatever quantities it likes, since it are the ultimate source of its currency, and so can always prevent it from appreciating more than it wants (as can any country which is prepared to accept the potentially inflationary consequences of a sudden large increase in its domestic money supply).

But China doesn’t own or operate a US dollar factory, so it can only stave off a big depreciation for as long as it has sufficient foreign exchange reserves to satisfy everyone who wants to convert its currency into foreign dollars.

And that’s why the capital controls are so important at the moment: because they limit the demand for foreign currencies enough to ensure that the level of foreign exchange reserves is more than adequate, and widely regarded as such.

If something were to happen that resulted in a tsunami of capital outflows, and the Chinese authorities didn’t have any other ways of stopping it (such as confiscating the assets of or imprisoning or executing people who tried to get their money out of the country, something which I am sure they might not baulk at) there would be a “currency crisis”; the Chinese renminbi fall a lot, and the weakness in the domestic financial system (resulting from the accumulation of so much bad debt) would be fully exposed.

But you have to ask, how likely is that in the foreseeable future?

I can’t see any reason to answer that question with anything other than “not very”.

It’s worth remembering in this context that the lesson which the Chinese Communist Party drew from the collapse of the Soviet empire is that brutal authoritarian regimes can only survive, once they have clearly failed to deliver on the promise of delivering ongoing improvements in people’s well-being, for as long as they are willing to kill their own people in sufficient numbers to quieten resistance, or for as long as there is someone else who is willing and able to do it for them.

The Communist regimes of Eastern Europe, most of which had been demonstrably willing to shoot their own people (or allow the Soviets in to do it for them) at various times in the 1950s, 1960s and early 1980s, collapsed when they lost the will to shoot their own people, and the Soviets under Gorbachev lost the will to do it for them.

And the Soviet Union itself collapsed in 1991 when neither Gorbachev, nor the cabal of drunken fools who briefly tried to overthrow him in August of that year, were willing to shoot their own people.

It is worth noting in passing that Vladimir Putin has repeatedly demonstrated that he has no such scruples about killing his own people – whether they be ordinary Russians in high-rise apartments around Moscow, middle-class Muscovites attending the theatre, school children and their parents in Beslan, troublesome journalists, former KGB agents living in the UK, lawyers for aggrieved hedge fund managers, or prominent opposition figures.

Read more: I kept silent to protect my colleague and friend, Kylie Moore-Gilbert. But Australia's quiet diplomatic approach is not working