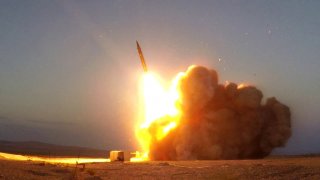 Here's What You Need To Remember: The backbone of Iran's missile forces are the Shahab-series of liquid-fueled (mostly) short-range ballistic missiles (SRBM). There are three variants of the missile: The Shahab-1, Shahab-2 and Shahab-3.

Zachary Keck is the former managing editor of The National Interest. You can find him on Twitter: @ZacharyKeck. (This first appeared back in 2017.) It is being republished due to reader interest.