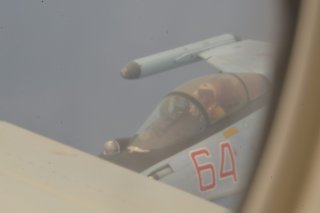 Here's What You Need to Remember: As a multirole fighter, the Su-35 can be used in a variety of missions and is capable of attacking ground and naval targets, including infrastructural facilities shielded by air defense systems as well as those located at a considerable distance from home airfields.

Given that it is a modernized version of a Cold War era Soviet fighter, it could be easy to dismiss the Sukhoi Su-35. Described as a heavily upgraded “generation four plus plus” (4++) derivative of the Su-27 aircraft, the Su-35 might not seem all that threatening—even if the Su-27 has developed its own reputation as an agile and versatile war bird.

However, that is still a serious underestimation of the capabilities of what is among the most advanced of the Flanker family. In fact, since entering service in 2014, the Sukhoi Su-35 remains the top Russian air-superiority fighter. It can intercept and destroy all classes of aerial targets in ranged and close air engagements, and moreover can operate in an air superiority role.

As a multirole fighter, the Su-35 can be used in a variety of missions and is capable of attacking ground and naval targets, including infrastructural facilities shielded by air defense systems as well as those located at a considerable distance from home airfields. The Russian fighter jet can deploy air-to-air missiles of up to 300-kilometers (190 mile) range, and it can also be armed with the heavy Oniks anti-ship cruise missile, as well as the multitude of air-to-ground weaponry. It can carry up to eight tons of the weapon payload (missiles and bombs of various types) on twelve underwing hardpoints, while the fighter jet’s other armament includes a 30mm aircraft gun.

It can operate independently, in a group of other fighters or as part of a battle group controlled from an aerial, ground-based or ship-based command center.

More Than a Fourth Generation Fighter

The Su-35 is a super-maneuverable multipurpose fighter jet that incorporates many fifth-generation technologies. This ensures that it is effective against aerial, ground and sea-surface targets.

The Su-35 is further distinguished by its improved avionics suite, which includes an advanced information control system, new radar and plasma ignition engines capable of increased capacity and thrust vectoring. Its engines have also met the requirements for the powerplant of a fifth-generation fighter, which enables it to reach supersonic speed without using an afterburner.

Additionally, the twin Saturn AL-41F1S turbofans provide the Su-35 with maneuverability that can easily match or exceed the evasion techniques of nearly all existing fourth generation fighters. With a maximum speed of 1,550 mph and a ceiling of 59,050 feet, it is a well-armed, speedy aircraft.

While it can get out of a fight quickly, the Su-35 was designed to hold its own. Armaments include a GSh-30-1 30mm autocannon with 150 rounds, along with 17,630 pounds of payload on 12 external points. It can carry a variety of air-to-air, air-to-surface, anti-radiation, and anti-ship missiles, as well as a number of TV, laser-, and satellite-guided bombs.

Also notable about the platform is that upgraded Su-35S was originally designed for export, but apparently the Moscow liked what it saw as the Russian Air Force became the aircraft’s launch customer in 2009.

Since that time, both the Chinese People’s Liberation Army Air Force (PLAAF) and the Indonesian Air Force have placed orders, and Beijing began receiving its initial delivery of four aircraft in 2016 followed by another ten in 2017 as part of a contract for twenty-four aircraft, which Jane’s reported was worth $2.5 billion. That’s not bad for a platform that started life back in the days of disco.