Double Threat: Is Australia Ready to Take on Climate Change and China? 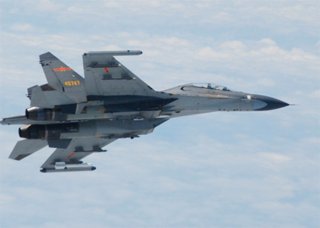 Two recent foreign policy developments in Canberra are shaping Australia’s 21st-century national security agenda. The first is the AUKUS agreement, which has at its core a deep and strategically courageous commitment to deterring China’s malign, hegemonic and military aspirations in the Indo-Pacific and around the world. Given this context, continuing to protect our way of life by generating an Australian Defence Force that sustains competitive advantages, in terms of our men and women in uniform and the technical systems they employ alongside our allies, from seabed to space, is the right thing to do.

The second development has been Australia’s slow approach to reducing the global economy’s carbon footprint to zero, as demonstrated by its contribution at COP26 and refusal to increase our 2030 emissions reduction targets.

Governments need to apply clear scientific evidence in speaking truth to Australian voters, especially those in the mining and agricultural sectors, about the human-made climate catastrophe unfolding around us and the adverse impact it will increasingly have on our way of life.

The term means different things to different people, but it boils down to the values underpinning democratic governance and individual freedom, an independent judiciary and media, universal human rights, and a free and open global trading system. Herein lies the rub. The same national-interest calculus around the China challenge that has driven significant investments in Australian defence capability, if applied to the climate challenge, should also have led Canberra to double-down on policies and investments to reduce carbon emissions.

The global socioeconomic pressures building in a bow-wave ahead of the earth’s warming are as much a challenge to Australia’s national interest as are China’s attempts to apply its authoritarian system to undermine and reorient global governance to its advantage. Surely there’s an appreciation in Canberra that the ADF’s focus in the years ahead will increasingly be pulled towards climate-driven domestic and regional disaster responses. This will inevitably dilute the ADF’s ability to sustain perishable higher-end combat capabilities. This tension won’t be resolved by military planners viewing the two threats as separate and sequential. In fact, they are integrated, concurrent and growing.

The US Army recently named China as it’s ‘pacing challenge’ for the foreseeable future. This is a foot-stomping acknowledgement of the threat China poses to the rules-based international order, upon which the vital geoeconomic interests of America and like-minded democracies like Australia stand. Even more important, though, was the declaration by President Joe Biden earlier this year that climate change poses an ‘existential threat to humanity’.

There’s a compelling argument to be made that the threat to the Australian national interest posed by climate change is much greater than that posed by the People’s Liberation Army, even though it has made great strides under Xi Jinping in its all-domain ‘intelligentised’ warfare capabilities and may have achieved a leap-ahead advantage in some disruptive technology and weapons capability areas.

Still, the centre of gravity for the CCP lies in the support it receives from the Chinese people. That support will inevitably weaken when the hundreds of millions of Chinese lifted out of poverty by China’s extraordinary economic rise find themselves adversely affected by the increases in drought, floods, fires, coastal inundation, fish protein collapse and mass migration pressures that will come if global warming tips past 2.0°C, as the Intergovernmental Panel on Climate Change predicts it will unless urgent global emergency response measures are taken now.

In addition to the hugely disruptive climate-related tipping points predicted to occur soon (if not already underway) at the poles, in the Himalayas and in the North Atlantic, another tipping point before 2050 could occur at that moment when the CCP realises it is unable to deploy the PLA for any substantive expeditionary force projection mission because it has become fixed internally on domestic, climate-related, large-scale crisis mitigation and the survival of the party.

A similar future could await us in Australia, as explained in the recent Australian Security Leaders Climate Group’s Missing in action report. Unless collective steps are taken now to limit global warming as close to 1.5°C as possible, the ADF will find itself repeatedly fighting the battle of the black summer. The increasing frequency and intensity of climate-related humanitarian and disaster response missions both at home and across the region will quickly consume available human and materiel ADF resources, making it extremely difficult to focus on sustaining combat readiness.

There is recognition in the Pentagon and in like-minded capitals that climate change is having a profound impact on the way militaries are trained, equipped and deployed. Climate security has emerged as a critical strategic planning factor for defence forces. Unless Australia and the global community find the collective will to stop contributing to global warming, climate security will become the predominant defence planning factor. In that scenario, climate change trumps China as Australia’s greatest national security risk in this century.

The impressive and necessary $270 billion investment in new capability for the ADF in this decade, announced in the 2020 defence strategic update and force structure plan, should have been accompanied by a similarly vital focus on reducing the existential threat of climate change, with plans for greater ADF involvement in climate-driven operations, both at home and over the rising seas. In that way, not only could the climate-related risks to Australian lives, property and natural ecosystems be reduced, but the ADF would remain well positioned to defend Australia from China or climate change, or a combination of both.

Paul Maddison, a former Canadian high commissioner to Australia and retired flag officer of the Royal Canadian Navy, is professor of practice and director of the UNSW Defence Research Institute. He is a member of the Australian Security Leaders Climate Group.

This article was originally published by the Australian Strategic Policy Institute and can be read here.