Doughboy Battledress: The U.S. Army's Uniform Of the Great War 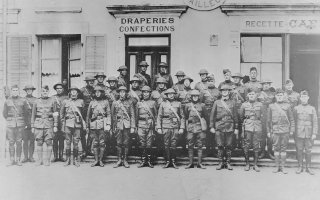 Here's What You Need to Know: When it came to equipment and accouterments in World War I, Americans led the way.

Following the Spanish-American War the U.S. Army reconsidered the uniform that its soldiers would wear in the field. A number of changes were made, and in December 1911 the War Department published the new Regulations for the Uniform of the United States Army.

When America entered the Great War (World War I) in the spring of 1917 its small army was outfitted in the M1912 khaki tunic that was made of olive drab wool. The standing collar coat was lined, and it featured four patch pockets with single-point flaps. There were five large front buttons and four small pocket buttons that bore the American eagle device. The tunic was worn with the M1912 semi-breeches that were tapered to fit into the M1910 canvas leggings, which covered the M1904 “marching shoes.”

As the U.S. Army prepared to head “over there” its two-hundred-thousand-man peacetime army swelled to more than three million in a short time. After the first units arrived in France the battledress of the U.S. Army was modified slightly. The M1918 tunic, still in olive drab wool, was simplified by the placing of internal pockets with external flaps. While the M1912 semi-breeches remained in use, puttees in olive drab replaced the canvas leggings, which looked neat and smart but proved to be too fragile for the rigors of trench warfare. Likewise, the marching shoes were replaced by the M1917 boots, which were more up to the tasks of frontline combat.

Officers wore essentially the same uniform as the men, although the tunic and matching breeches were a slightly lighter shade of drab. There was also the addition of a single line of drab lace on the cuff. Riding boots or other tall boots were popular with officers, but junior officers at the front often wore puttees and the M1917 boots.

While not widely issued some soldiers did wear the M1910 khaki summer or “tropical” uniform in the summer months of 1918. It was cut to the same pattern as the M1912 uniform and still worn with leggings. It was a lighter material but not as durable and thus not widely used at the front.

The felt campaign hat of the Spanish-American War was replaced after the war by a new version, dubbed the 1902 Service Hat. This had a similar shape, but it gave way to the M1912 campaign hat, which was made from khaki-brown rabbit skin felt shaped with its peak in the shape of the “Montana” style. Due to the sudden increase in the size of the U.S. Army most soldiers were instead issued with French and British made overseas caps.

By America’s entry into the war, the combatant nations were issuing steel helmets to their respective soldiers at the front. The American military planners opted for a number of designs, and some were even field-tested in France—but the bulk of the American forces were issued the Model 1917 steel helmet, a near-direct copy of the British MkI steel helmet. It was made of manganese steel and painted with a non-reflective khaki brown paint with a sand finish.

Although the United States was able to equip its fast-growing army, small arms were in short supply when America entered the war. The U.S. Army noted a number of failings with the Krag-Jorgensen rifle and carbine and replaced this with the M1903 .30 Springfield, which became the stand issue rifle in 1905. It was relatively short at forty-three-inches and weighted under nine pounds. It could be fitted with the Model 1905 bayonet that measured sixteen inches.

While the Rock Island and Springfield Arsenals worked to keep up with demand for the Springfield rifle, the military turned to civilian manufacturers including Remington and Winchester, which were already producing the P14 rifle for the British. The P14 production was modified to switch from the British .303in caliber to the American .30—and these Model 1917 rifles (commonly called the U.S. Enfield) headed over there.

Many officers and NCOs, as well as runners, machine gunners and even cavalrymen, were issued with pistols. The now infamous caliber .45, Colt Model 1911 automatic pistol was officially adopted and went into production just in time for the war. However, as Colt was unable to meet the demand for the automatic pistols the Army procured revolvers from Colt and Smith & Wesson. The new pistols were an upgrade of the Model 1909 revolver but chambered to .45 caliber—as a result it required “half-moon clips” to hold the army cartridge in place.

A variety of other small arms were used by the Doughboys in France. One of the most infamous was the M1897 Winchester twelve-gauge pump-action shotgun. It was so hated by the Germans that they lodged a formal protest to Geneva over its use!

In addition to the M1905 bayonet soldiers were issued with two types of fighting knives—and both are known for their respective “knuckle duster” handguards that allowed the knives to be used for punching as well as stabbing!

If the U.S. Army was trying to play catch up with the European powers in small arms and helmet development when it entered the war it could be argued that the Americans were already leading the way with equipment and accouterments. While leather was still being used by the various combatants the United States Army had been utilizing canvas gear since before the Spanish-American War.

The Doughboys were equipped with the M1910 rifle belt, which included ten pouches that held five-round charger clips—giving the soldier a total of one hundred rounds. Attached to this “web belt” were a first aid pouch and the M1910 aluminum water bottle (canteen) with its own cup that together was fitted into a fabric carrier lined with felt for coolness. The belt fastened to the M1907 suspenders that held the M1910 haversack, which contained rations, washing kit, M1910 shovel, bayonet and other gear. The downside to the M1910 pack carrier system is that it could not be worn without the belt and was thus complicated to assemble.

The M1910 rifle belt was updated with the M1917 cartridge belt that still featured ten pouches, but these were fastened by an improved stud system—the so-called “lift the dot” type. Additional cartridges could be carried in a bandolier that was made of light khaki cloth. Soldiers at the front lines were issued with the M1917 gas mask, which was a copy of the British “small box respirator.”

Although not authorized for wear, many U.S. Army officers adopted the policy of wearing the “Sam Browne” belt, which was widely recognized by all combatants as the symbol of officer rank. It helped the “Doughboy” officers earn respect with their European counterparts “Over There.”