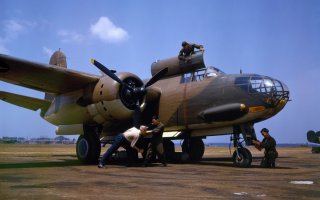 Here's What You Need to Know: The A-20 brought havoc to the enemy.

During the Second World War, the Douglas Aircraft Company produced several important aircraft, and today the SBD Dauntless dive bomber and C-47 Skytrain are largely remembered for the role each played in the war effort. Then there was the A-20 Havoc, a bomber that was used in numerous fronts around the globe including Europe, Africa, the Middle East, and the Pacific.

Overshadowed by the likes of the B-17 and B-24, the A-20 has been overlooked for its contributions—even though it was the most-produced attack bomber produced during the war. A total of 7,477 DB-7/A-20s were built. The mid-wing, twin-engine medium bomber was noted for its survivability, which helped ensure that it could take significant damage and still get its crew home. At the same time, it lived up to its “Havoc” name delivering a serious punch to the enemy. It was designed as a light bomber, but during the war operated more like a fighter, while it was also used in a night intruder and reconnaissance role.

Development of the bomber began in the mid-1930s and it entered production in 1938. While the United States couldn't openly support the governments in London or Paris, officials from the French Air Force were able to see the aircraft in development and ordered the first 107 of the DB-7s—the Douglas designation for the aircraft. The planes were delivered via ship to Casablanca and arrived in mainland France by the time of the German invasion in the spring of 1940.

The aircraft were used in dozens of sorties against the Germans, but were evacuated to North Africa before France fell. The aircraft remained under the control of the Vichy French, but was later employed by the Free French forces and used as trainers, while some were later used against the German forces in occupied France at the end of the war. The Royal Air Force also took over many DB-7s that were ordered by the French and Belgian governments and designated “Boston” in RAF service the aircraft were initially fielded as day bombers used against German targets in North Africa and Europe. However, the aircraft was found to be unsuitable in that role and it was modified into a dedicated night-fighter.

When the United States entered the war, the U.S. Army Air Corps designed the A-20 Havoc and it served in every theater of the war. Additionally, more than half of all the DB-7/A-20s that were built were provided to America's allies during the war with most sent to the Soviet Union.

Armament varied, but the standard configuration included six fixed forward-firing .50 caliber Browning machine guns in the nose and twin .50 calibers in the dorsal turret, as well as an additional .50 caliber mounted behind the bomb bay. It gave the BD-7/A-20 that ability to bring havoc to the enemy.