Dream On: The Idea of Bringing Back the Battleships Just Won't Die 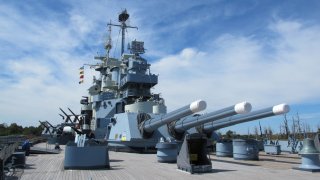 Here's What You Need to Remember: Reconfiguring the Iowa-class battleships was both controversial and enormously expensive. Nevertheless, the Navy and the Reagan administration felt that the ships filled an important gap in U.S. naval capabilities, especially given the growth of the Soviet fleet. But for modern warfare, this doesn't hold much water.

No one expected the battleships to leave so quickly.

The U.S. Navy reactivated the four battleships of the Iowa class in the mid-1980s, equipping them with sea- and land-attack missiles, as well as modern electronics and similar facilities. The drive to reactivate the battleships came from a strategic interest in increasing the size of the Navy, as well as concern over the construction of the Soviet Kirov-class nuclear battlecruisers.

But in 1992, less than ten years after New Jersey had returned to service, the Navy decommissioned USS Missouri, last of the four Iowas. The second life of the class lasted, collectively, less than twenty-five years. The retirement of the battleships created a hole in U.S. seapower that the Navy struggled to fill in the 1990s, and still has not adequately addressed.

Reconfiguring the Iowa-class battleships was both controversial and enormously expensive. Nevertheless, the Navy and the Reagan administration felt that the ships filled an important gap in U.S. naval capabilities, especially given the growth of the Soviet fleet. Between 1982 and 1988, all four ships re-entered service with a modern electronics suite and a significant number of missiles.

USS New Jersey, first to re-enter service, saw action during the Lebanese Civil War, pounding Druze and Shia positions (although the accuracy of its fire came into question). New Jersey and its sisters would play a variety of roles for the rest of the 1980s, despite concerns about the ships’ reliability. However, an accident on USS Iowa in 1989 nearly led to the loss of the ship, and pointed to more systematic problems in the handling of the battleships.

As Cold War tensions began to wane (the Berlin Wall came down five months after Iowa’s incident), the Navy began to look at cost-cutting measures. The receding of the Soviet threat seemed to relax the need for the battleships, which would no longer be required to anchor task forces. A lack of clarity of the ship’s roles complicated the situation. The Navy viewed the battleship as centerpieces of battlegroups, capable of helping contest open seas against the Soviet fleet. Although they had substantial land-attack capability, they were not normally thought of as part of the amphibious team, even as the United States Navy began thinking more seriously about the littoral in the mid-1980s.

Other problems included unforeseen crew costs (the Navy had to rebuild expertise on much of the battleships’ equipment, including the main guns), concerns about the material condition of the ships, and the rapid rate of technological change (the missile-launch systems equipped on the Iowas had become obsolete by the early 1990s). Consequently, New Jersey and Iowa left service in 1990 and early 1991; Missouri and Wisconsin would hang around the participate in the Gulf War before retiring.

The Navy had not expected to mothball the battleships so soon after modernization. New Jersey had served for only nine years in its new configuration; Wisconsin only served three. But other ships at the end of the Cold War experienced similarly brief service lives, including two classes of nuclear-powered missile cruiser. Still, the reasons for decommissioning the battleships were sound at the time, and remain sound today; they were far too expensive to operate for the capabilities that they offered.

However, changes in the U.S. Navy’s orientation kept the idea of restoring the battleships on the table. The Iowas left service before the real “littoral turn” in U.S. naval doctrine refocused attention on amphibious warfare. With the effective end of the Soviet Navy, the traditional concepts that had dominated U.S. naval thinking since the end of the nineteenth century receded into the background; to the extent that the Navy wanted to make a contribution, it needed to come through the effects that its ships could project onto land. And the battleships were uniquely well-suited to delivering specific kinds of effects (an apparently endless rain of heavy shellfire) onto land.

Thus, the debate over the future of the battleships became a debate about the Navy’s gunfire contribution to Marine Corps amphibious operations. The Marine Corps (and groups associated with the USMC) argued that at least two of the battleships (Iowa and Wisconsin) should be kept in useful reserve status in order to provide gunfire support if necessary. The Navy, for its part, repeated the arguments that had carried the day in 1990; the ships were too old, too expensive to operate, and (by the late 1990s) too expensive to modernize to extant fleet standards.

Nevertheless, Congress mandated that Iowa and Wisconsin should remain in reserve status, capable of reactivation without significant refit or modernization. In practical terms, reactivation would have been extremely expensive and difficult, but the continued existence of the hulls made it a possibility.

Interest in a large surface combatant remained, and not simply because of the need for naval gunfire support. The Surface Combatant for the 21st Century program sought to develop a new destroyer and a new cruiser, the latter likely larger than any U.S. surface warship built since 1945. The two new classes offered a way of resolving the gunfire support question, as both were expected to carry the 155-millimeter Advanced Gun System, capable of precisely delivering ordnance, at a high rate of fire, to targets well within the interior. The destroyer would likely have predominately played the gun support role, as the cruiser needed to include area air-defense capabilities. In the end, of course, the cruiser was cancelled, the destroyer curtailed, and the roles of both mostly filled by advanced Arleigh Burkes.

The Zumwalt-class destroyers, even with their curtailed buy, seemingly resolved the naval-gunfire support debate, although many questioned whether they could have the same impact as the battleships. However, the high cost of ordnance for the 155-millimeter gun has meant that many of the promises of the Zumwalts will not be fulfilled. It remains to be seen whether rail guns or some other kind of delivery system will satisfy the shore-bombardment concerns of the U.S. Marine Corps.