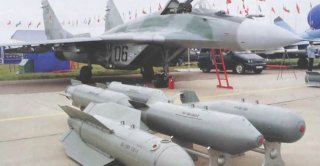 There has been a lot of focus on Russia's efforts to develop a hypersonic missile, but Moscow is also looking for a more cost-effective and far less technical form of ordnance in its Drel glide bomb, which could enter full production by 2023.

"I believe we will be completing the Drel project already next year," said Igor Nasenkov, CEO of Technodinamika Group, which part of the state tech corporation Rostec.

"If we wrap up the trials next year, we will be actually able to start serial production from 2023," Naskenkov explained during the congress of the Union of Russian Machine-Builders on Wednesday, according to a report from TASS.

The PBK-500U Drel glide air bomb was developed by the Bazalt Research and Production Association – within Techmash Research and Production Group – beginning in 2016. Designated to destroy an adversary's armor, ground radar stations, command posts, and even propulsion units of surface-to-air missile systems, the Drel is an inertial and GLONASS-guided (Global Navigation Satellite System-guided) stealth cluster glide bomb. It weighs over 500 kilograms and has an effective range of 30 to 50 kilometers.

The current iteration of the Drel reportedly contains fifteen SPBE-K (self-guided anti-tank element) charges weighing around fifteen kilograms each, which should place them just below the twenty kg submunition limit of the 2008 Convention of Cluster Munitions.

It is reported to be equipped with a friend or foe identification system and electronic countermeasures making it resistant to jamming as well as to radar detection. Its developers at Bazalt Research have also considered equipping the PBK-500U Drel with a pulsejet engine to further increase its range.

It has been suggested that the bomb, which has a smaller effective radius than larger and more costly platforms, could be ideal when used against an enemy on the move. As was previously reported, the Drel was meant to be a cost-effective weapon so overkill has never been the intention – it was described that there is an "absurdity of trying to hit something like a $15,000 Jeep with a $500,000 air-to-surface missile." Thus, the Drel is a much more cost-effect solution for use in low-intensity conflicts.

The Drel can be mounted on a wide range of Russian mid-range aircraft including the Tu-22M bomber and the Su-24. It is also reported to be compatible with the Su-57.

Development of the platform has been slow going. The Drel – Russian for "Drill" – was prominently displayed at Russia's "Army 2017" weapons show, and at the time it was suggested that the first Drel bombs would begin to enter service by the end of 2018. Now years later, the system is still yet to enter full production. Some of the delays may be due to the fact that its developers wanted to put it to the test in Syria before it entered the final production phase.