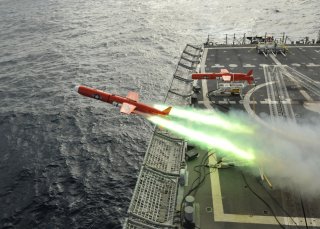 Here's What You Need to Know: Engineered with technologies specific to a maritime operational environment, the Triton operates with de-icing systems enabled by a heated engine inlet, an ability to change altitude and operate beneath the weather and cover an operational range of 8,200 nautical miles. The drone can hit altitudes up to 60,000 feet.

The Navy only operates two Triton drones in the Pacific, yet there is an insatiable demand for more intelligence, surveillance, and reconnaissance (ISR). And with oceanic regions spanning millions of miles of ocean, this introduces questions about the scale of drone operations in the Pacific and the pace at which the Navy and Air Force are accelerating plans to add more unmanned systems to the force.

While not known for being stealthy, High-Altitude Long Endurance drones, such as the Navy Triton for ocean patrols and the Air Force Global Hawk for land surveillance, take on new significance in light of the Pentagon’s “network everything” Joint All Domain Command and Control program (JADC2). The JADC2 effort, which relies heavily upon manned-unmanned platform connectivity, gains in operational efficiency by virtue of having drones gather, process, and transmit data to manned platforms operating at safer distances.

This is part of why the Navy and Air Force are both working to maintain and modernize its drone fleet, with a particular emphasis upon maritime surveillance in light of the South China Sea and the vast expanse of the Pacific theater.

The Navy, which bases Tritons in Guam, plans upgrades to these drones to include the addition of an “enhanced multi-mission sensor capability as part of the Navy’s Maritime Intelligence, Surveillance, Reconnaissance and Targeting transition plan,” Lt. James Adams, U.S. Pacific Fleet Public Affairs, told The National Interest in a statement. The Navy is also installing next-generation aircraft avoidance systems on the Triton, such as the Automatic Response Module of the Airborne Collision Avoidance System X into the MQ-4C Triton’s avionics system.

Engineered with technologies specific to a maritime operational environment, the Triton operates with de-icing systems enabled by a heated engine inlet, an ability to change altitude and operate beneath the weather and cover an operational range of 8,200 nautical miles. The drone can hit altitudes up to 60,000 feet.

The Triton is engineered with an AESA, or electronically scanned array as well as an inverse synthetic aperture radar intended to generate images, data, renderings and full-motion video of relevance to commanders. Also, along with having EW capability to detect electronic signals, the drone is also autonomous in that it can account for weather conditions, adjust altitude and change course in certain circumstances without needing to be remotely piloted.

Navy senior leaders, including the Chief of Naval Operations Adm. Michael Gilday, continue to call for more assets in the Pacific, particularly drones.

“They (drones) will expand our intelligence, surveillance, and reconnaissance advantage, add depth to our missile magazines, and provide additional means to keep our distributed force provisioned,” Gilday writes in his NAVPLAN.

Apart from any particular plan to add more Tritons, Air Force leaders seem aligned with the Navy in that there is an ongoing demand, particularly in the Pacific, for more surveillance drones and ISR platforms needed to support a broader push to enlarge the force overall.

“You know, as the PACAF (Pacific Air Force) Commander, one of the things I would show was a slide that showed the comparison between the number of platforms China would have in 2025, the number of platforms the U.S. and our allies and partners in the region would have by 2025. We’re outnumbered. But it’s not about the platforms. It’s about the capabilities,” Air Force Chief of Staff Gen. Charles Brown, told an audience at the 2021 Air Force Association Symposium, according to a transcript of his remarks.