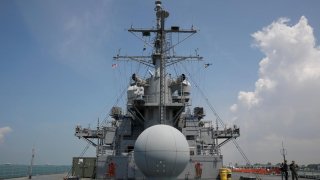 Here's What You Need To Remember: Small, heavily armed warships can be the stepping stone between drones and human-run ships.

As the U.S. Navy moves into the unmanned age and implements Distributed Maritime Operations (DMO), there is a need for small, lightly manned warships to streamline that transition and fill roles which require a human crew. Congress has expressed concerns about unmanned vessels on a number of fronts and highlighted the need for a class of ships to bridge the gap. The Naval Postgraduate School’s Lightly Manned Autonomous Combat Capability program (LMACC) has designed a warship to meet this need.

The need for these small, heavily armed warships has also been well established, and is based on extensive analysis and wargaming across the Navy’s innovation centers. These ships will provide distributed forward forces capable of conducting surface warfare and striking missile sites from within the weapons engagement zone of a hostile A2/AD system. They will be commanded by human tactical experts and operate in packs with supporting unmanned vessels, like the Sea Hunter MDUSV, to distribute capabilities and minimize the impact of combat losses.

Our intent with this article is to publicly lay out the engineering dimension of the LMACC program. Since the United States does not have a small warship to use as a baseline, it is necessary to first establish what our requirements should be based on our unique needs. Fortunately, this can be accomplished in a relatively straightforward manner by broadly analyzing how foreign ships are designed to meet their nation’s needs, and using that understanding to establish our own requirements. As such, we will start by examining the choices faced by other nations, use that to develop a core of minimum requirements for an American warship, examine its shortcomings when compared with other budget options, and finally discuss how to affordably expand on that to deliver a capability set the Navy will be happy with. Once we have established our requirements and overall configuration, we will conclude with a discussion of our approach to automation, manning, concepts of operations, future special mission variants, and current status.

(The scope of this article has been deliberately limited to the engineering side of the LMACC program. Our acquisition approach will be discussed in an upcoming issue of the Naval Engineers Journal. Fleet and budget integration was discussed in a previous article on USNI blog, “Beyond High-Low: The Lethal and Affordable Three-Tier Fleet.”)

Due to our relative lack of practical domestic experience in the field of small warship development, we will start with an examination of foreign designs to build a transferable understanding of their capabilities, limitations, and design tradeoffs. Since there are many ship classes used worldwide, it is impractical to discuss every example individually. We will instead discuss mission areas and compromises in generic terms and leave it to the reader to consider how specific foreign designs were built to meet their nation’s needs. Areas of design interest include anti-ship missiles, survivability, anti-submarine warfare (ASW), and launch facilities. The first three subsections divide the discussion between large and small nations, while the final subsection is split by type of launch facility. Each subsection then concludes with a discussion of how this translates to the United States’ unique situation. This will then set us up for the subsequent discussion of the basic preliminary requirements for a generic small American warship.

Small warships are frequently given labels like “missile boat” or “corvette” based on their primary armament of anti-ship missiles with little further thought. However, not all missiles are created equal. The choice of missile is driven by the platform’s intended use.

Small nations (e.g. Norway) attempting to defend themselves on a limited budget typically prioritize lethality with a highly capable missile designed for sinking major warships. However, because they often face limitations in offboard sensors, strategic depth, and force structure to absorb combat losses, they tend to sacrifice range and networking capability to control missile cost and weight.

Large nations prioritizing coastal defense against a more powerful opponent (e.g. Russia and China’s A2/AD systems) tend to view their small warships as part of a larger system. These ships are intended as much to complicate enemy targeting and defensive formations as they are to sink ships. As a consequence of this, they are more likely to invest in range and networking since they can reasonably expect to take advantage of it, but may be willing to save money by arming these ships with less expensive, and therefore typically less lethal, weapons.

Due to the nature of the U.S. Navy’s highly networked, forward deployed forces, we cannot accept these compromises and must arm our small warships with highly lethal, long-range, networked weapons.

A major concern with all warships is survivability. One of the key distinguishing features of small warships is how they address this problem. Rather than rely on a large, expensive missile system to destroy threats at long range, these small warships instead rely primarily on avoiding attack and feature only limited point defense weapons. This is achieved through a combination of small size, signature reduction, electronic warfare, and tactics.

It is important to remember other nations are frequently focused primarily on pre-launch survivability rather than a counterattack based on the missiles’ signature. This lack of focus on post-launch survivability is generally based on the assumption that the cost ratio of the exchange will generally be in their favor even if they lose the ship. Another important consideration, especially for smaller nations, is that their ports are usually very vulnerable to a standoff strike, so surviving ships may not be able to rearm or refuel and are therefore effectively out of action even if they do survive. For large nations with sophisticated A2/AD systems, protecting these ships is usually primarily the responsibility of other platforms, allowing significant savings by reducing survivability-related costs.

Smaller nations usually invest more in survivability features and trade endurance for extremely high speed to improve their odds of getting into attack position before they are sunk. They also commonly employ tactics to make their ships difficult to track in peacetime by exploiting maritime geography and blending into commercial traffic to avoid a preemptive strike.

The United States can count on having a safe port to rearm somewhere, even if it requires withdrawing all the way to CONUS, so we would need to further emphasize evasion since these ships would have to persist within hostile A2/AD networks even after launching missiles. This means it would be essential for a small American warship to use a stealthy, networked missile capable of flying deceptive routes to mask the launch point, as well as the best electronic warfare equipment, passive sensors, and acoustic signature reduction we can afford. Other forms of signature reduction are an interesting question because there is a risk of standing out from civilian traffic if the warship’s signature is significantly different from those around it. After all, a Chinese maritime patrol aircraft could easily recognize that a “buoy” making an open-ocean transit is actually a small warship. On the flipside, we have no need for the high speed favored by many foreign nations, especially since blending in with slow-moving civilian traffic will be a critical aspect of survivability. Therefore, we should trade speed for range to control cost and project power from our generally safe but distant ports.

One final U.S.-specific feature which could greatly enhance survivability inside A2/AD networks, reduce range requirements, and reduce the logistical burden is the exclusion of gas turbines in favor of diesel engines. This will allow these ships to stop at any commercial port to take on diesel fuel, and possibly food, while further enhancing the illusion that they are small commercial vessels. With some imaginative leadership, this will provide virtually unlimited in-theater range and loiter time with minimal logistical support, simplifying our operations and complicating the situation for the enemy.

While many small warships include ASW capability, they are usually intended to operate as coastal area denial platforms rather than oceangoing escorts or sub-hunters. For nations worried about hostile submarines, this area denial provides essential protection to ports and other coastal facilities which would otherwise be extremely vulnerable. In contrast, performing the latter high-end missions requires the large aviation facilities and expensive sonars of a frigate or destroyer.

Thanks to our large nuclear-powered attack submarine fleet and the remoteness of hostile submarine forces, we don’t need a small surface ship to defend our ports from submarines, so this ASW equipment is generally best omitted. The U.S. only needs the ship to have a reasonable chance of surviving in a theater with hostile submarines, and this can be most economically provided by acoustic signature reduction and appropriate tactics. In fact, the active sonar systems used for area denial by other nations would be detrimental in American service since they let hostile submarines detect the ship from much further away.