Drowning in Debt: Why Joe Biden Must Given Students Relief 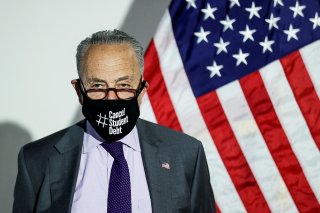 Here's What You Need to Remember: The White House has announced an education department review of the question of whether the administration can legally take executive action to cancel student loan debt. There has been no word on whether that review is finished and if so, what the outcome was.

President Biden, during his campaign of 2020, promised some level of student debt forgiveness. So far, as president, he has not yet delivered that. This has some asking whether Biden actually intends to follow through on that promise.

A new report, however, says that the idea of student debt forgiveness isn’t quite dead after all.

According to CNBC, various experts believe that there’s still a chance that forgiveness will happen.

“There is certainly a chance,” Andre M. Perry, a senior fellow with the Brookings Metropolitan Policy Program, told CNBC. Perry added that he’s encouraged by the strength of Senators Charles Schumer and Elizabeth Warren, who are leading the effort in the Senate, as well as by the involvement of the NAACP.

“Student loan forgiveness wasn’t included in the president’s budget request or in the infrastructure legislation,” higher education expert Mark Kantrowitz told  CNBC. “Some people are interpreting that as the president moving away from loan forgiveness. I don’t see it that way.”

There has also been a letter signed by more than 400 organizations, calling for executive action by the president to cancel student debt.

“Before the COVID-19 public health crisis began, student debt was already a drag on the national economy, weighing heaviest on Black and Latinx communities, as well as women,” that letter said.

“That weight is likely to be exponentially magnified given the disproportionate toll that COVID-19 is taking on both the health and economic security of people of color and women. To minimize the harm to the next generation and help narrow the racial and gender wealth gaps, bold and immediate action is needed to protect student loan borrowers, including Parent PLUS borrowers, by canceling existing debt.”

There is also polling that shows the majority of Americans support student debt cancellation.

The White House has announced an education department review of the question of whether the administration can legally take executive action to cancel student loan debt. There has been no word on whether that review is finished and if so, what the outcome was. In the meantime, Biden has not included debt cancellation in either his budget request or his proposed spending packages, although the administration did include two years of free community college in the proposed American Families Plan.

One thing that’s clear is that the debt cancellation if it happens, won’t be total, nor will it represent “free college” for all or even most Americans.

“The idea that you go to Penn and you’re paying a total of 70,000 bucks a year and the public should pay for that? I don’t agree,” Biden told the New York Times’s David Brooks last month.