DShK Machine Gun: This Picture Should Terrify You 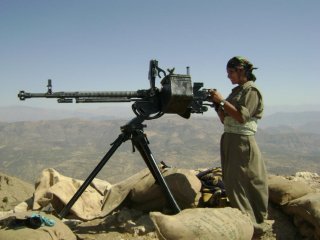 Here's What You Need to Remember: The context in which the DShK was used has led it to have a dramatically different impact on military events well into the present day.

The gunner of a Dushka (“Dear”) pulls a V-shaped “butterfly” trigger between two wooden handles to shoot gun at a rate of fire of six hundred rounds per minute to an effective range of one-and-a-half miles. Two side-by-side “spider-web” ring sights help adjust for the “lead” when targeting aircraft. The hefty gun is air-cooled and has a ribbed barrel. You can get a sense of the prodigious sound, flash, and recoil produced by a DShK in this video.