Dump Trumpism?: Republicans Must Decide the Future of their Party 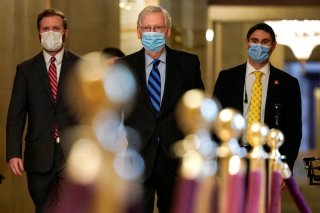 In a historic vote today, Donald Trump became the only US president to be impeached twice.

By a margin of 232–197, the Democrat-controlled US House of Representatives voted to charge Trump with “inciting violence against the government of the United States” for his role in encouraging the insurrectionists who stormed the US Capitol last week.

When Trump was impeached by the House last year for abuse of power and obstruction of Congress, no Republicans joined the Democrats in the vote.

This time, however, ten members of Trump’s own party supported the effort to remove him from office.

Is there any chance of conviction?

Now that the House has voted to impeach Trump, a trial will be held in the Senate, though the timing of this is unclear at the moment.

A two-thirds majority in the Senate is required to convict Trump, which would be 67 senators if all senators are present. If all 50 Democrats and independents vote to convict Trump as expected, then at least 17 Republicans would need to join them.

So far, only three (Lisa Murkowski, Ben Sasse and Pat Toomey) have indicated they would do so. Mitt Romney, a vocal Trump critic, will probably join them, and Susan Collins is a possibility.

Even though the most powerful Senate Republican, Mitch McConnell, is said to be privately supporting the impeachment effort (and publicly said he hasn’t decided how he will vote), the numbers required to convict Trump will likely still fall short.

What’s at stake for Republicans?

Trump’s former national security advisor, John Bolton, has said the president “will be remembered as an aberration” when he leaves office after noon on January 20.

Nevertheless, the Republican Party will go on. And it will need to find its identify in the post-Trump era.

Do they continue with the arch-conservatism of the past decade that gave rise to the Tea Party and Trump, or do they return to the more traditional Republican politics associated with George W. Bush, John McCain and Romney?

While some Senate Republicans have loudly declared their allegiance to Trump, others appear to be suddenly on the fence.

Lindsey Graham, who went from being one of Trump’s most outspoken opponents to his staunchest backer in Congress, last week broke with Trump over his efforts to overturn the 2020 election results. However, Graham is strongly opposed to impeachment.

McConnell, too, could be looking ahead to rebuilding the party post-Trump, which is why he is said to be wavering on his vote to convict Trump. As one Republican close to him told Axios,

If you’re McConnell, you want to be remembered for defending the Senate and the institution.

The most prominent Republican to join the impeachment effort in the House is Liz Cheney.

The daughter of former US Vice President Dick Cheney has only been in Congress since 2017. After just two years, however, she was elected chair of the House Republican Conference, the third-most senior Republican position in the House after minority leader (Kevin McCarthy) and minority whip (Steve Scalise).

A rising star in the party, Cheney surprised many when she said she wouldn’t run for the open Senate seat in Wyoming last year, opting to stay in the House.

With both McCarthy and Scalise voting against impeachment today, Cheney’s move suggests she is positioning herself as a leader of the anti-Trump faction in the party, with eyes on perhaps becoming the first female Republican House speaker.

It must be noted that a significant portion of the American electorate still supports Trump and his policies. According to FiveThirtyEight, about 42% of Americans do not support impeachment. And among Republicans, just 15% say they want him removed from office.

Whoever leads the Republican Party post-Trump will need to consider how they will maintain the rabid support of his “base”, while working to regain more moderate voters who defected from the party in the 2020 election.

The reason McConnell is reportedly said to be considering voting to convict Trump is that is would make it easier to purge him from the party.

But purging Trump will be difficult. Even without Twitter, the power Trump wields is immense. The fear among many Republicans is that he can encourage primary challenges to any incumbents he feels have wronged him.

He’s done this many times before. In 2018, Trump strongly endorsed Brian Kemp in his successful campaign for governor of Georgia, but when Kemp rejected his claims of election fraud in November, Trump announced he was ashamed of having supported him. Trump loyalists are already looking for a primary challenger to him.

Trump has also called for primary challenges to Republican Ohio governor Mike Dewine and John Thune, the number two Republican in the Senate.

Trump doesn’t appear to want to go away quietly, which is also a cause for concern from a security standpoint.

This week, a leaked internal FBI bulletin warned that armed protests are planned for all 50 states and Washington DC in the days before President-elect Joe Biden’s inauguration on January 20.

Some state capitol buildings have begun boarding up their doors and windows, while 15,000 National Guard troops have been mobilised for deployment to the nation’s capital ahead of expected violence and unrest.

This is an unfortunate sign of how many expect Trump’s supporters to respond to both his impeachment and Biden’s inauguration — even with Trump finally urging against further violence and unrest.

Most presidents aim to leave office with the nation better off than when they entered, but Trump’s legacy appears to be cementing a more divided country, where his brand of aggressive “conflict politics” may be the new norm.

This is a no-win situation for the country. And Republicans are still trying to figure out which side of history they want to be on.