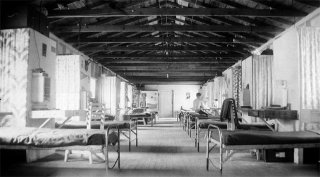 The vast majority of Americans supported involvement in World War II, but a small minority refused to serve in combat because of their religious, philosophical, political or moral beliefs.

The Selective Service and Training Act of 1940 gave these conscientious objectors the option of serving in non-combat military roles — such as the medical corps —or joining the Civilian Public Service for non-military “work of national importance under civilian direction.”

Those who refused either option went to prison.

The PBS documentary The Good War and Those Who Refused to Fight It points out that roughly 43,000 Americans refused to fight in World War II and filed for conscientious objector status. Of those, 25,000 served as noncombatants in the military, 6,000 went to prison — one-sixth of the prison population at the time — and 12,000 served in CPS.

Conscientious objectors working with the CPS usually went to one of 152 camps or 58 mental institutions and training schools for the “mental deficient” located across the country. Those housed at the camps performed forestry work and fought forest fires. Those at mental institutions cared for the patients and maintained the facilities.

But 500 conscientious objectors “competed to volunteer” to be “human guinea pigs” for “dangerous and life-threatening medical experiments seeking cures for malaria, infections hepatitis, atypical pneumonia and typhus,” according to the PBS Website for The Good War.

“Some C.O. subjects were inoculated with live hepatitis virus … other C.O. volunteers were covered with lice and sprayed with DDT, or subjected to high altitudes, extreme temperatures and lengthy periods of immobility.”

“I was young and I wanted to show that I was not a coward,” objector Neil Hartman explained.

“So when they offered me this chance of being a guinea pig, it fit right in with my scheme of things of proving that I was willing to take risks on my own body, but I just did not want to kill someone else.”

The experiments were dangerous and sometimes deadly. The most harrowing was the University of Minnesota’s starvation experiment.

The project called for the 36 men of “healthy” weight to volunteer to lose 25 percent of their body weight during a year-long cycle that included a sixth-month phase of “semi-starvation.” The University of Minnesota Press published the results of the experiment as The Biology of Human Starvation, a two-volume, 1,300-page tome, in 1950.

The experiment started innocently enough. Researchers at the Laboratory of Physiological Hygiene at the University of Minnesota — a multi-disciplinary center that focused on human physiology and nutrition — realized that despite an awareness of the history of mass starvation, there was scarce clinical research on its physical and psychological effects.

“It was frightening to realize how little any of us knew about severe starvation,” Sir Jack Drummond wrote in a foreword to the book.

“In our lifetime millions of our fellow men had died in terrible famines, in China, in India, in the USSR, without these tragedies having yielded more than a few grains of knowledge how best to deal with such situations on a scientific basis.”

Ancel Keys, the scientist who directed the experiment and served as lead author of The Biology of Human Starvation, also cited the famines and food shortages caused by the onset of World War II and other recent wars as justification for the research.

“Starvation conditions appeared in many parts of the world as a direct result of World War II,” he wrote in the book. “The Spanish Civil War, which was a prelude to the more general conflict, produced much starvation and a normal nutritional state had not been achieved in Spain in 10 years.”

“The Japanese invasion of China produced immediate food shortages there because of the disruption of transportation, the interference with agriculture, mass migration, and the requisitioning of food by the Japanese Army.”

Keys also noted lesser food shortages in France, Belgium, Italy, Germany, Austria and Hungary as a result of the wars. But for Keys, the more pressing issue was how to better rehabilitate Allied soldiers and others freed from prisons and concentration camps, and improving relief efforts for civilians suffering from malnutrition or extreme starvation.

As the Allies liberated the African, European and Pacific theaters from the Axis, they encountered millions of malnourished and starving people. “World War II was remarkable for the enormous numbers of people who were kept in prisons or concentration camps or were placed under conditions of slavery by the Germans and Japanese,” Keys wrote.

“In general, all these people — and their total must be counted in millions — were ill-fed at best and deliberately starved to death at worst.”

Keys assigned Josef Brozek, the laboratory’s chief psychologist, to the task of recruiting volunteers for the experiment. According to a 2013 American Psychological Association article, Keys relied on conscientious objectors from the Civilian Public Service for previous studies.

“He knew from experience that many conscientious objectors were eager to do meaningful work that would benefit humanity and was confident that the starvation experiment would attract the needed volunteers,” the APA noted.

The Journal of Nutrition reported that Keys and Brozek used a brochure titled “Will You Starve That They Be Better Fed?” to court volunteers from CPS camps. In a matter of months, Keys received more than 400 applications for the 36 spots he needed. He interviewed 100 of those and selected the most physically and psychologically fit.

The experiment began on Nov. 19, 1944 when the 36 volunteers took up residency in the Laboratory of Physiological Hygiene. It ended almost a year later on Oct. 20, 1945.

Those numbers may not seem extreme, but the effects on the volunteers were “dramatic” and wide-ranging according to the APA.

“Beyond the gaunt appearance of the men, there were significant decreases in their strength and stamina, body temperature, heart rate and sex drive.”

The psychological effects were just as bad. “Hunger made the men obsessed with food. They would dream and fantasize about food, read and talk about food and savor the two meals a day they received. They reported fatigue, irritability, depression and apathy,” the APA reported.

Some of the volunteers simply couldn’t handle it. Two of the men broke their diet, and the scientists removed them from the experiment.

One of the two “stopped at various shops for sundaes and malted milks and later stole and ate several raw rutabagas and the other consumed huge amounts of gum and admitted to eating scraps of food from garbage cans,” noted the Journal of Nutrition. Both men briefly stayed in the psychiatric ward of the university after Keys released them from the experiment.

World War II was over by the time the experiment concluded. But the volunteers’ suffering wasn’t all for nothing. Keys published the results and his experiment helped Washington shape European reconstruction.

“The dramatic results of the experiments were so severe and long-term that they helped to inspire the Marshall Plan which, as a keystone of U.S. foreign policy, set a precedent for helping countries combat poverty, disease and malnutrition after the war,” PBS reported.

The actions of America’s conscientious objects during World War II prove that they weren’t cowards, just men and women who didn’t want to kill.