Earlier Shelter-in-Place Coronavirus Orders Could Have Saved 1,600 Lives in California 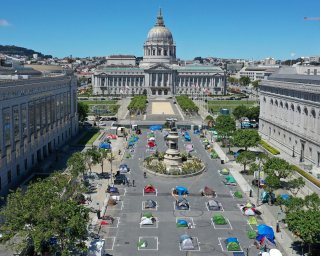 The primary strategy to slow the spread of the coronavirus has been social distancing, which reduces contact between individuals.

While the federal government can recommend social distancing, the decision to issue formal measures ultimately resides with state and local governments. Though almost every state in the nation eventually implemented some policy to combat COVID-19, there was a lot of variation in what was done and how quickly each state acted.

In recent research with the Center for Health Economics and Policy Studies, we examined the strongest of such measures, the shelter-in-place order. We focused on the order in California, which was the first to be implemented.

California provides an important case study for several reasons. This is a state which not only implemented its social distancing measures early in terms of the date, but also early relative to the growth rate of the statewide outbreak.

While both states acted quickly in terms of the calendar, California was faster relative to the progression of its outbreak.

Second, California has several dense population centers, meaning that, like New York, it was a location where the disease had the potential to spread in an incredibly rapid fashion.

Additional research has shown that social distancing measures tend to be more effective in more urbanized locations. California continues to serve as a bellwether case allowing other states and researchers to obtain valuable early data.

The difficulty with looking at a single state is that it is difficult to tell what would have happened in the absence of the shelter-in-place order.

This is where California moving early helps from a research perspective. At the same time California put its policy in place, many states which share attributes with California, such as Massachusetts and Colorado, did not.

The first question that we sought to answer was whether California’s shelter-in-place order actually got individuals to stay at home since some – but not all – people were already avoiding social contact when it went into effect. We wanted to see if California’s new rules increased social distancing, keeping in mind that violation of the new order counts as a misdemeanor offense and can carry jail time.

To do this, we used anonymous cellphone data from SafeGraph, which has made its resources available to researchers for free to study the pandemic. These data track what percent of cellphones leave their owner’s home in given day. From this, we gathered that due to the order, individuals stayed home for the entire day about 2% to 3% more than they would have otherwise.

Next, we looked at daily case and death rates using data from the Centers for Disease Control and Prevention and the New York Times. We estimated that California’s shelter-in-place order reduced the number of confirmed cases by roughly 50,000 in the month following the policy.

At the same time, nothing is free. During the month after California’s shelter-in-place order was enacted, California saw an increase in its unemployment insurance claims of 2.83 million.

If we conservatively attribute all of these lost jobs to the new policies, then our estimates imply a trade-off of around 400 jobs lost per COVID-19 death averted. Reality is likely more nuanced. Some of these jobs would have been lost anyway due to individuals social distancing on their own and spending less, practices that reduced the the need for workers.

This leads to two important types of questions.

First, is the trade-off worth it? This question is going to be debated for some time to come. We hope our numbers can help individuals understand the trade-off when forming their opinions.

The second type of questions are even more difficult. For example: How much of the COVID-19 spread was prevented, and how much was simply pushed off until later in the pandemic? In a similar vein, how many jobs were lost permanently, and how many will be recovered quickly once the pandemic is under control?

These are the big questions that will shape the trajectory of the pandemic, the economic recovery to follow and policy surrounding the two. It is what we and other economists will be watching carefully in the months to come.