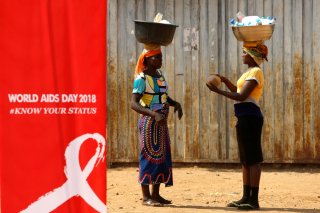 The World AIDS Day commemoration of 2020 took place in the midst of a global pandemic. It served as another reminder that people are not only susceptible to pathogens, but to the political, social and economic inequities that determine vulnerability to infections.

HIV remains a major global public health challenge and COVID-19 has added to it. This is especially so in the eastern and southern Africa region – the epicentre of the HIV epidemic, with 800,000 new HIV infections each year, just under half of the global total. Progress towards eliminating AIDS in the region by 2030 was already lagging behind the targets before COVID-19 and government lockdowns have thrown it even further off course. The lockdowns slowed service provision in testing, treatment and care.

It’s estimated that such disruptions will have a substantial effect on population-level mortality. HIV-related deaths could increase by up to 1.06 times over a year if disruptions affect half of the population living with HIV/AIDS.

Although AIDS-related deaths among adolescents and young people have generally been decreasing in the region, the mortality rate remains high among adolescent girls and young women. Progress on preventing HIV transmission is still far too slow, with girls aged 10-19 accounting for 83% of new HIV infections. They are more vulnerable to HIV because of their unequal cultural, social and economic status in society. Recent estimates are that girls and women in this age group are about twice as likely as their male peers to be infected with HIV.

Lowering rates of HIV infection among girls and young women in the region is a critical priority. But the impact will be limited if the structural drivers that shape risk behaviours are not addressed and prevention responses are undermined.

Our book, Preventing HIV Among Young People in Southern and Eastern Africa: Emerging Evidence and Intervention Strategies examines the efforts to confront and reduce the high level of new HIV infections among young people in eastern and southern Africa. Taking a multi-dimensional approach to prevention, we discuss the many challenges facing these efforts, focusing particularly on the structural and social drivers of HIV.

The book presents evidence from east and southern Africa which provides valuable insights into how to mitigate HIV risk among young people. It discusses which interventions work, why they work and the limitations and gaps in our knowledge.

Chapters in this book discuss the structural drivers of HIV infection for adolescents and young people. Structural drivers are social and cultural norms, values, networks and institutions that influence HIV epidemics. They include restrictive laws and policies, such as age of consent laws and criminalisation of people of different gender and sexual orientations. Other drivers are adult-oriented HIV services that adolescents perceive as intimidating, and poor quality services which discourage service uptake.

Social issues such as poverty and poor education, harmful gender norms, stigma and discrimination also drive transactional sex. Cultural norms such as forced marriage increase risk of HIV infection. Alcohol and drug availability and promotion are also factors. Each of these may influence the more immediate determinants of HIV risk – such as patterns of sexual behaviour and poor health-seeking behaviours.

The evidence collected in the book shows that keeping girls in school not only reduces HIV risk, but also delays marriage and pregnancy, and improves mental health. Similarly, reducing heavy alcohol use has benefits for other health outcomes – it reduces unsafe abortions and transactional sex. Structural interventions give girls and young women the skills, knowledge and capacity to reduce their risk of HIV acquisition.

Addressing primary social vulnerabilities to HIV has a great impact. It can change patterns of risk, increase access to healthcare, promote autonomy and agency and improve adherence to HIV treatment. Current “structural type” interventions which have shown promise include income generation, cash transfer programmes and support for livelihoods. Others encourage young girls to stay at school and enhance life skills to keep girls safe.

Targeting adolescents and reducing their risk will be pivotal to determining the course of the epidemic in sub-Saharan Africa. Governments must work together and find ways to scale up targeted investments in prevention, diagnosis and treatment. Interventions can make a difference not only by reducing the risk of HIV but by empowering girls and women to manage their health and wellbeing more broadly.

An increased emphasis on structural approaches will make it even more important that different sectors and stakeholders work together. This may take place through existing mechanisms, or it may be necessary to create new collaboration mechanisms or involve new partners.

Programme implementers, lobbying industries and pharmaceutical companies will need to form alliances and partnerships with researchers and other groups who have not previously been directly involved in HIV prevention programmes, such as community development or microcredit organisations. This will enable them to develop, test and evaluate structural approaches.

We don’t need innovative solutions – we need to do what we know works and do it efficiently and consistently. The focus should be on the “furthest behind” first so that no one is left behind.