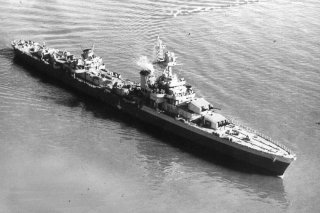 In June 1940, the 581-foot-long French light cruiser Émile Bertin sat docked in Halifax, when back in Europe, French officers gathered in the late Ferdinand Foch’s railway car at Compiègne to sign the humiliating armistice with Nazi Germany — sealing continental France’s subordination to German hegemony for a following four years.

Émile Bertin‘s crew and skipper found themselves in the curious situation of being docked at a country still at war with Germany after their own country had surrendered.

To complicate the situation further, the warship was on her second trip hauling gold reserves from France to shelter in Canada. Unfortunately for the Allies, the cruiser’s skipper ordered the vessel — with the gold — to dash for the Vichy-held volcanic island of Martinique in the Caribbean instead of joining the Free French Forces.

She made a successful voyage unbothered by the Royal Navy, which couldn’t catch the fast-moving cruiser.

The glamorous French steam transport ship Pasteur — another ship hauling gold — was not so lucky, and Allied troops seized her before she could make it out of port. Pasteur went on to have a productive war-time career in British service moving troops and German prisoners of war. (Pasteur‘s fate: she sank accidentally in the Indian Ocean in 1980 while being towed to a Taiwanese scrapyard.)

French warships like Émile Bertin, however, had fascinating, adventurous and often tragic careers.

In July 1940, Vichy French vessels and sailors at Mers-el-Kebir off Algeria suffered heavy losses from British air and naval attack. At Dakar in 1940, French destroyers boldly shot their way out of a harbor under heavy fire while laying smoke. At Toulon in 1942, French Adm. François Darlan scuttled 77 vessels to prevent them from falling into German hands after the Nazis invaded “neutral” Vichy.

Émile Bertin was a lucky ship. Launched in 1933, she was a destroyer flotilla flagship and spent the early war — still in the Allies — moving Polish gold to French-controlled Lebanon. A sleek, fast and beautiful ship, the Émile Bertin could make 34 knots at top speed thanks to six boilers and steam turbines producing 102,000 shaft horsepower. She carried two seaplanes and a launch catapult.

For armament, the cruiser — and others of the Émile Bertin class — carried nine six-inch cannons in three turrets, two on the forward deck and one rear. She had formidable anti-aircraft defenses, including four 3.5-inch guns, eight 1.5-inchers and eight 13.2-millimeter guns. She had six torpedo tubes and also carried 200 sea mines — one of her primary duties.

Her one combat mission occurred off Norway during Operation Weseruebung, the German invasion in 1940, where she sustained damage during a German air attack. Then once in Vichy hands, she sat at Martinique unused and technically out of the wa