England Football Fandom’s Struggle with its Own Image 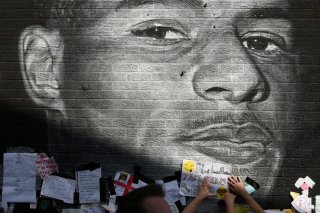 Packed bars; England taking an early lead; a febrile atmosphere; abusive and violent behaviour as the team concedes an equaliser and eventually loses on penalties. The night of the Euro 96 match between England and Germany that concluded my first study of football fandom 25 years ago seemed rather less distant as England lost to Italy in the Euro 2020 final last weekend.

The persistence of the dark sides of England fandom contrasts with talk of a “new England” over recent weeks. England fans who hold progressive beliefs displayed their enthusiasm for a team and manager who have been outspoken on matters of equality and social justice, taken a public stance against racism and supported its LGBTQ+ fans.

Social media platforms were filled with tropes of supporting England for the cause. Sincere proclamation of “the real meaning” of the evergreen England anthem Three Lions, eagerly stressed that there was nothing jingoistic or xenophobic in saying, or singing, that football’s home was England. Co-creator of the song, comedian and writer David Baddiel, was called on to confirm the song’s correct interpretation.

In my field of the study of media audiences, it’s clear that no such “correct reading” of these symbols exists, they’re all subject to contested interpretations. The more popular they are, the more likely they are to be challenged. Supporters of sports teams arrive at their own sometimes highly idiosyncratic readings of what “their” team comes to symbolise. The booing of England players taking a knee by a significant number of England fans shows that even the team itself is limited in its ability to shape what England represents to its fans.

This isn’t to say that the context in which fans make sense of the team they support doesn’t matter. The outpouring of support for players subjected to racial abuse this year shows the degree to which the England team’s anti-racism campaign has helped to create an awareness of forms and effects of racism. Even those previously unsupportive of player’s anti-racism actions, such as right-wing tabloids or the current home secretary and prime minister thought it important to distance themselves from such racism, albeit to accusations of hypocrisy from members of the England squad.

However, fan attachments, especially in football, form and persist over years, decades and lifetimes and for most England fans were established long before this tournament. The England fans imagine is shaped through their identity and sense of belonging, which reflects the country’s politics and how it represents its history. Few countries – especially large ones – arrive at a view of themselves that evades themes of superiority, beleagueredness and entitlement. England is certainly not among them.

The activism by athletes as principled as Marcus Rashford is among the thousands of factors that reshape this national narrative over time. However, even to the degree that it creates change, the abusive and violent aspects of England support are likely to persist for a simple structural reason.

The nation is the basic concept around which international football is organised; a concept that is premised on drawing lines of inclusion and exclusion. On occasions, football can contest how these lines are drawn: global migration, for instance, is increasingly reflected in the makeup of national teams that challenge ethno-nationalist ideas of a country. Even so, supporters of all national teams can’t escape the need of these lines being drawn somewhere, of pinning “us” versus “them”.

This principle is inescapable even for those who see themselves as fans of a new, progressive England. As the Guardian’s chief sports writer Barney Ronay observed, exceptionalism also manifests itself in “talking constantly about how nice your team is, how admirable, how humble”, thus playing into the paradox of “progressive” England fandom: “there was that old attitude England deserved to win as a matter of right. Now they deserve to win because they are humble and don’t think that.”

All football fandom is thus premised on a “we” that is imagined in opposition to an other - those who are not part of the community our team represents. This is equally true for club football, yet the fan communities that form around clubs are generally less defined through a concept such as nation.

Football players are part of the object of the fandom: England. The abuse they receive is constructed as a failure to see that they’re “one of us”. But there’s no political cost for MPs supporting hugely popular athletes, which is perhaps why so many rallied around them. This also helps to explain why, since the final, there’s been a much greater focus on the online abuse directed at Rashford, Jadon Sancho and Bukayo Saka than the manifest violence by England fans against “outsider” members of the public.

The government has been notably less willing to reflect on the abuse and violence a significant number of England fans have long perpetrated against other fans, spanning from the Italy and Denmark supporters targeted and physically attacked during Euro 2020 to the exchange student mistaken as German and stabbed within walking distance of where I concluded my study in 1996. Nor has it acknowledged the reality of frequent intimidation and violence by England fans directed at ordinary people of colour.

Condemning this violence would force us to confront the link between racism and nationalism. A populist government that relies on antagonism, nationalism and imagined opposition between England and its European neighbours as its central narrative has little interest in such reflections. Although, nor do we as fans. Accepting that the toxic quality of supporting national football teams derives from the very thing we are a fan of might be yet harder to deal with than another loss after penalties.

Cornel Sandvoss is a Professor of Media and Journalism, University of Huddersfield