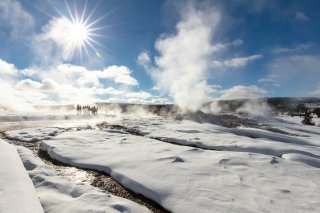 Earlier this month, President Trump signed an executive order making it easier for pipeline projects and other oil and gas development to progress, claiming environmental regulations cause economic burdens and cost jobs.

A more effective way to stimulate the economy and protect the environment, my work suggests, is to pass legislation such as the Great American Outdoors Act, a bill the Senate will vote on later this week. The House introduced companion legislation earlier this month.

I’m an expert in employment in the U.S. economy, and my recent research shows that conservation and park development create far more jobs than oil and gas. These two categories are not always mutually exclusive, but often a choice must be made about how to use public lands – conserve them, develop them as parks or open them up to exploration for oil and gas.

My research uses the input-output model, a tool economists use to study the economic impacts of spending changes in a national or regional economy. Expansion of the oil and gas industry, for instance, can be compared to expansion of conservation or park development.

Using this type of model, researchers can capture the links among different industries and estimate the economy-wide impact of any spending change, including the change in employment that results by spending US$1 million in conservation in comparison to oil and gas. Employment changes that result from both public and private spending can be evaluated using this model.

The model shows that each $1 million of spending creates between 17 and 31 jobs in conservation and related industries, while only eight jobs are created through oil and gas.

Stimulating the environment helps the economy

Trump’s recent executive order wasn’t signed in a vacuum. As of May 20, 2020, The New York Times reported that 100 environmental rollbacks were underway, with 66 completed over the past three years and 34 in progress.

Together, these rollbacks allow for more carbon emissions and other pollution from industrial facilities and vehicles. They also open up land for more oil and gas development by reducing protections for land, water and wildlife.

But oil and gas development are among the most capital-intensive industries in the economy, meaning that the bulk of the spending in these industries is for equipment, including drilling platforms, pipelines and refining plants. Only a small portion of the spending is for labor costs – 13% as of 2018.

Conservation is much more labor intensive, with a higher proportion of overall spending going to pay workers rather than buy equipment and materials.

It’s true that oil extraction is often privately funded, but when public lands are used for oil and gas development, this precludes other uses such as conservation or outdoor recreation.

Conservation in the Senate

Funding conservation also happens to be an area with bipartisan support, as the great outdoors appeals to anglers, nature enthusiasts, hunters and wildlife lovers alike.

Fully funding the Land and Water Conservation Fund, at $900 million per year, would support up to 28,000 jobs, according to my estimates. An additional $1.9 billion per year for five years contained in the Great American Outdoors Act would support an added 59,000 jobs in parks development and restoration of public lands nationwide.

The act could therefore support close to 100,000 jobs annually. These jobs include not only the park and conservation workers themselves – what we call the “direct jobs” – but workers throughout the supply chain, such as bus drivers, restaurant workers and sporting goods retailers.

Conservation and park jobs, in addition to having a wide range of skill level and pay, also are spread throughout the country, unlike oil and gas development, which is concentrated in the Gulf states, Pennsylvania, Ohio, North Dakota, Alaska and the Pacific Northwest.

The pandemic of COVID-19 has had devastating economic effects on individuals and businesses. Research shows that funding conservation and outdoor recreation is one way to help Americans get back on their feet.

Heidi Peltier, Research Professor in Political Science; Faculty Research Fellow at the Pardee Center for the Study of the Longer-Range Future, Boston University