The Era Of The M4 Carbine Is Over: What Comes Next May Surprise You 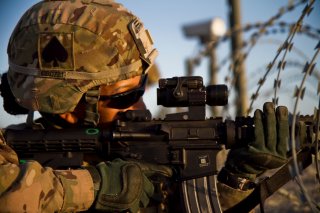 Here's What You Need To Remember: The M4 Carbine has seen active combat actions in Afghanistan since 2001 and in Iraq since 2003. However, it is still based on the M16 system, and while more than a mini-version of that legacy weapon, the days of the M4 carbine are certainly numbered.

In January, the U.S. Army picked the three finalists to replace both the legacy M249 squad automatic weapon and M4 carbine. The three companies, which include Sig Sauer, General Dynamics Ordnance and Tactical Systems and Textron Systems will provide prototypes for soldier evaluation by the of this year. While each of the respective designs is starkly different, each will be chambered for the new 6.8mm round, which was developed to be more lethal than the currently used 5.56 NATO ammunition.

The M4 is an air-cooled, gas-operated, magazine-fed carbine with a 14.5-inch barrel and telescoping stock. It is now the standard issue infantry weapon for most units in the U.S. military, replacing the M16, which was first introduced during the Vietnam War.

However, while the M4 is a shortened variant of the M16A2 and has 80 percent commonality with its predecessor, the carbine shouldn't be seen as just a "mini M16." The M4 carbine was developed for use in close quarters operations while offering soldiers improved handling, as well as the capability to rapidly and accurately engage targets at extended ranges.

The M4 wasn't the U.S. military's first foray with a shortened M16 – as during the Vietnam War, the Pentagon provided U.S. Army Green Berets and U.S. Navy SEALs with a shorter version of the then-standard infantry rifle. This was Colt's CAR-15, which was officially classified as "Submachine Gun, 5.56-mm, CAR-15" at the time, but was really the forerunner of the modern M4.

While the CAR-15 was compact, the shorter barrel had a significant issue – it produced a bright fireball at the end of the muzzle and had a truly loud report. The flash hider wasn't up to the task, while the shortened barrel also reduced the range and accuracy. An oversized flash suppressor was added to address these shortcomings, but in 1970 production of the CAR-15 Commando ended.

In the early 1980s the U.S. government opted to call upon Colt to develop a new carbine version of the M16A2, and this began as the XM4 – it combined the best elements of the older XM177E2 , the Colt AR-15 Sporter Carbine and the M16A2. This included that shorter barrel and collapsible stock, while the end result was 1.3 pounds lighter and 6.58 inches shorter with stock extended/10 inches shorter with stock collapsed than the M16A2. It can be fitted with numerous accessories including night vision devices, laser point optics, telescopic sights and even bipods.

The M4 Carbine has seen active combat actions in Afghanistan since 2001 and in Iraq since 2003. However, it is still based on the M16 system, and while more than a mini-version of that legacy weapon, the days of the M4 carbine are certainly numbered.