Europe Must Take Its Fate Into Its Own Hands 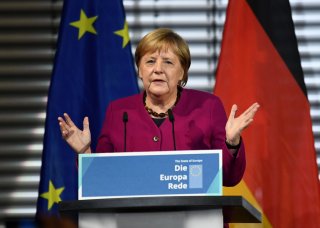 Following the rise of Donald Trump to nomination and presidency, there has been no shortage of articles arguing that the 2016 election was a wake-up call to Europeans. But even if Mark Leonard’s recent essay, “Geopolitical Europe in times of Covid-19,” is late to the party, it is no less striking. For one, it comes from someone genuinely committed to the success of the European project — someone who once predicted that the EU’s appeal will enable it to “run the 21st century” — and yet the bulk of this essay consists of dispelling the “pleasant fiction” that Europeans are “creating a world of rules with their continent at the center.”

The financial crisis, the refugee crisis, and the current pandemic have not led to the emergence of “co-operative, global solutions to help nation states to cope with these low-probability, high impact scenarios.” Instead, the crises coincided with the gradual erosion of global rules and their enforcement that Europeans long took for granted — the decline of the WTO, China’s interference with freedom of navigation, and Russia’s brazen violations of Ukraine’s territorial sovereignty. Given that the EU’s modus operandi, both internally and as an international actor, is based on rules and their export, this trend risks rendering it ineffective in navigating the world as it currently exists.

Moreover, Leonard argues, Europe has started moving to the periphery:

“During the Cold War and in its aftermath, the Global order and the European order seemed to reinforce one another. There was a sense of a Western community of values underpinned by Europe’s status as the front-line and prize in the USA-Soviet global competition. That status meant, for reasons well beyond the cultural connection, that the USA was always solicitous of European concerns. Somewhere between 9/11 and the Covid-19 crisis, Europe stopped being the center of global politics.”

Regardless of who is in the White House, as Europe becomes less intrinsically important, the United States will be willing to take care of its regional security only in exchange for the continent’s commitment to assist with US efforts to contain China. Leonard downplays the extent to which US and European interests regarding China are in fact aligned. Chinese mercantilist trade practices, intellectual property theft, human rights abuses, growing belligerence in the region, and its use of economic tools to build a network of client states are as much a threat to Europe as they are to the United States. And, rhetoric aside, neither Europe nor the United States are in a position to really decouple their economies from China without imposing significant costs on their own economies.

Leonard, however, is correct to note that in order to navigate the geopolitical environment, the EU must

“move away from thinking about geopolitics as a space for permanent alliances and institutions in support of EU values and interests. Increasingly, Europeans will need to see the values as permanent but recognize geopolitics as a space for shifting, temporary alignments in support of them (including with powers that do not share those values). While the transatlantic alliance will continue to be central to Europe, and it would be unwise and unrealistic to do anything to undermine it, Europeans will need to recognize that its future health will depend more and more on Europeans’ ability to show that they are taking more responsibility for their own affairs.”

Germany’s role is critical both in the efforts to establish concrete deterrence against adversaries and keeping the broader European neighborhood safe from Russian, Chinese, or Turkish interference. That means a ‘European pillar’ within NATO, a forward presence in Eastern Europe, and also new mechanisms for making collective strategic decisions in real time. But it is not just about effective military capabilities:

“It is important that the EU includes a military component in its tool box, but its ability to have a muscular foreign policy will depend more on its mindset and its ability to translate other assets into “hard power”. In that context, instead of asking Germany to fulfil the 2% goal, the rest of the EU should ask Germany to weaponize the other 98% of its economy and put its trading power at the service of Europe’s strategic goals.”

Leonard’s list of concrete policies is tilted heavily in favor of tools that will enable European companies to escape “extraterritorial” sanctions from Washington, but his broader point stands. The “rules-based order” is not self-preserving. If the EU — and Germany — really want to defend it instead of just talking about it, they will have to become far more ruthless, strategic, and power-driven.

Still, the nature of Europe’s predicament is not exactly news — it has been almost four years since Angela Merkel urged Europeans to “take their fate into their own hands.” If the past decade of crises and turbulent politics has not been enough to reverse the bloc’s entropy, one wonders if anything ever will.