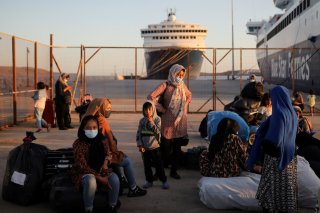 When we think of the gruelling journeys refugees often take to reach Europe, our minds often cast back to 2015, when more than a million people fled danger in search of a better life.

For many refugees, destinations in northern Europe such as Germany and Sweden were the ultimate goal. Word-of-mouth had it that in these welfare states, the stability, democracy and human rights they were looking for would bring about new beginnings and accomplished dreams.

Yet arriving in these countries often revealed a different picture. Official government responses to refugees, many of whom had escaped wars in countries like Syria, Afghanistan and Iraq, were somewhat hostile.

In our recently published book, Refugees and the Violence of Welfare Bureaucracies in Northern Europe, we analyse how refugees are treated by welfare states and the results of that reception on their lives and experiences.

One of the contributors, Wendy Pearlman, interviewed Mahmoud, a young engineer from Damascus living in Germany who fled Syria and encountered under-employment and exploitation in Turkey. When asked why he decided to risk his life and move to Europe, he explained his choice of Germany as a destination:

I heard that here education is almost free. They teach you the language, they put you in a house and so on … So I decided that either I live in humiliation in Turkey or I grab my future in Germany.

So, what happened to the refugees who made it to northern Europe? What were their experiences, and did they get a better life as they had hoped?

Asylum seekers as a risk

Our work in Sweden, Denmark, Norway, Germany and the UK showed that the welfare states saw border-crossers as risks that had to be controlled through a number of interventions. This means that, despite being granted asylum, many refugees face hurdles that create frustrations and even despair.

We saw how welfare states maintain a high level of discipline and control over people’s daily lives, especially newly arrived refugees. We refer to these as different forms of violence to illustrate how they cause struggle, harm and cruelty. Cases in Denmark, the UK and Sweden provide examples of more obvious use of physical force used in detaining and deporting migrants.

In Denmark, Sweden and the UK, women who have already been subjected to domestic violence in their home countries experience arrests and removal to detention centres when their cases for asylum are refused. Unable to cook their own food in Danish detention centres or even leave the premises (even when they have the legal right), the women who spoke to our colleague, Victoria Canning, were unable to find joy in the few activities available to them.

Different institutions such as employment services, reception facilities and migration agences impose everyday limitations and regulations relating to access to higher education, work, housing and physical mobility. All of these have long-lasting effects on the lives of refugees and force them into a position of subordination.

The effects of waiting

Perhaps one of the most frustrating parts of the refugee experience is inaction. Refugees experience delays of indeterminate length before they can begin looking for a job or pursuing education.

Looking at Palestinian and Syrian refugees’ experiences in Sweden and Germany respectively, we found significant obstacles to entry into the workforce. The refugees we spoke to described extensive requirements for integration programs, official certification of degrees and internships.

Such hurdles force refugees to abandon their dreams. A considerable number of people have been granted asylum and residence permits in Norway but are stuck for years at asylum centres, unable to start language courses, be reunited with their families or look for jobs. Instead, they wait for a municipality to receive them.

While they’re forced to wait, they often end up feeling powerless and worthless. In different cases, it is not only the long asylum process that puts life on hold but also waiting for government institutions to deem refugees capable of starting a new life.

Refugees are not really welcome

Day-to-day interactions with state representatives such as police and immigration officers, caseworkers and social workers remind refugees that they are seen as an imposition on the welfare state, while being denied the ability to become contributing members to it.

In an interview, the national coordinator for a refugee women’s support organisation in the UK, told our colleague:

The ethos of the asylum system … from dispersing people, or giving them tiny amounts of money, to not letting them work, to detaining people – it just seems really clear that in all of these stages of the asylum process you’ve got a system that doesn’t want those people to be here.

Encounters between state representatives and new arrivals highlight the difference between refugees’ assumptions about a relatively welcoming northern Europe and the realities of restrictive laws and regulations, lengthy asylum processes, patronising integration programs, not to mention a generally unwelcoming public debate.

Many refugees experience welfare state interventions as hindering or delaying their ability to settle in new places. It is a pity and a waste of resources that inherently poor risk management and bureaucracy has come to overshadow the lives of many newly arrived refugees in Europe.