Even Before Trump, America's Work-Based Immigration Quota Was Tiny 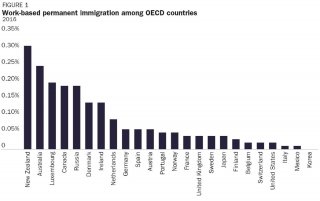 The United States allowed very few immigrants for work compared to other countries that are members of the Organisation for Economic Co‐​operation and Development (OECD) even before Trump took office. Of the 24 countries for which data are available from the OECD, the United States ranked 21st for employment‐​based permanent immigration in 2016.

Figure 1 shows the inflow of new employment‐​based permanent immigrants as a share of the country’s population for the 24 OECD members with available data as of 2016. The U.S. rate was 0.02 percent of its population in 2016. The United States not only ranks low—the difference is dramatic. Its admission rate is about 90 percent below the world leaders: New Zealand, Australia, Luxembourg, and Canada. Its work‐​based immigration system is even lower than notoriously closed off Japan.

The United States closed off system for employment‐​based immigration has resulted in a backlog of more than 1 million workers, investors, and their families waiting for the ability to become permanent residents. Unique among the OECD members, the U.S. system limits immigrants from any single birthplace from receiving more than 7 percent of the total green cards issued (unless they would otherwise go unused), which has caused nearly the entire backlog for workers to develop among Indians and some Chinese.

If Joe Biden becomes the next president, Congress may have the opportunity to revisit this extremely outdated system that it last updated in 1990. The United States benefits greatly from skilled immigration, and a system this broken pushes companies to grow in places where they can hire the talent they need. The data show that this state of affairs existed even before President Trump added far more restrictions in the last four years, so a return to the pre‐​Trump era will not fix this problem.