Every Supreme Court Nomination Should Not Be A Cataclysmic Event 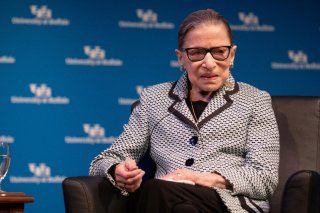 The death of Justice Ruth Bader Ginsburg would be a tragedy at any time, but her death only six weeks before a rancorous presidential election has thrown a match into our already smoldering political tinderbox. At a time when inter‐​party animosity is uncomfortably high, it’s time to call upon the better angels of our nature to determine the future of our most precarious branch of government.

In the coming weeks, there will be much discussion—if not shouting—over who should choose Justice Ginsburg’s replacement and how the Senate should behave. While the constitutional questions are simple—the president has the right to nominate a justice and the Senate has the right to confirm or not—there are bigger questions of political and institutional propriety at stake. A well‐​functioning liberal democracy depends not only on determining what can be done—as in what is allowed by constitutional rules—but also what should be done.

The schismatic Trump era, and even the years before, have made the importance of institutional norms more apparent. Our Framers set up a well‐​designed constitutional framework, but that terse 4,500-word document hardly contains all the rules needed to construct a free, liberal, and tolerant society. Some norms, such as not threatening to jail your political opponents, help establish the process of a peaceful transfer of power. Other norms, such as not Borking Supreme Court nominees, were violated long ago and became the new normal.

Those constitutional virtues have not been on strong display over the past four years. Elections have been contested, diplomatic powers have been abused, and pardons have been distributed as personal and political favors. Meanwhile, armed protestors have taken to the streets and actually fought and murdered their political opponents.

While our constitutional virtues are being consistently tested and violated, the norms surrounding the Supreme Court should be treated with particular care. The Court, lacking any manner to enforce its judgments, depends on the perception of legitimacy to carry out its essential role. As Hamilton put it in Federalist 78, the judiciary “has no influence over either the sword or the purse; no direction either of the strength or of the wealth of the society; and can take no active resolution whatever. It may truly be said to have neither FORCE nor WILL, but merely judgment; and must ultimately depend upon the aid of the executive arm even for the efficacy of its judgments.”

Hamilton warned that the judiciary “is in continual jeopardy of being overpowered, awed, or influenced by its co‐​ordinate branches.” Given the power the Court holds today, that may sound anachronistic. Yet it is still true. Any power the Court has comes from the respect it receives from the people, the other branches of the federal government, and state and local governments. If it loses that respect, our nation could find itself in a situation where Supreme Court decisions are routinely resisted and violated.

As Senator McConnell and other Republicans ponder their next action, this should be at the forefront of their minds. After holding up the nomination of Merrick Garland in 2016, and after the heated nomination process for Justice Brett Kavanaugh, the public perception of the Supreme Court has been significantly impaired. This is true regardless of which party “started it” or which party has been more righteous. Senate Republicans who endorsed holding up Garland’s nomination because it was an election year will understandably be accused of rank hypocrisy if they vote to confirm Ginsburg’s replacement. Any nominee who takes Ginsburg’s seat under those circumstances will serve under a cloud of illegitimacy for their entire career.

Democrats are now threatening to pack the Court if Republicans fill the seat and if the Democrats have control of the House, Senate, and presidency after the November election. That would mean adding seats to the Court to increase the total amount of justices (the Constitution doesn’t set the size of the Court, Congress does). Court packing has long been a third rail in American politics. FDR enjoyed almost dictatorial power over the government when he proposed it in 1937, yet it was his own party that rebuked him and said, “that’s not how we do things.” Even now, that discarded proposal sticks out as the time when we came too close to fully politicizing the judiciary.

In a time of cutthroat, dirty politics, one wonders whether there is any politician left who will sacrifice short‐​term gain for the long‐​term health of the country. Our Supreme Court nomination process is too close to being permanently broken—when no Senate ever confirms an opposite‐​party president’s nominee. Republicans should seriously examine whether a Supreme Court conservative majority of 6–3 rather than 5–4 is worth the damage to the Court’s legitimacy. Democrats pondering packing the Court should understand that, once that line is crossed, there is no going back.

George Washington is rightly our most revered Founding Father because he consistently put decorum and virtue over power grabs and petty politics. In his farewell address, he warned about the dangers of political parties, with words that are stunningly prophetic for today. He acknowledged that partisan politics was to some extent inevitable—“a fire not to be quenched”—yet, even if it can’t be extinguished, “it demands a uniform vigilance to prevent its bursting into a flame, lest, instead of warming, it should consume.”