Everyone Is Getting Aircraft Carriers Except Japan. Here's Why. 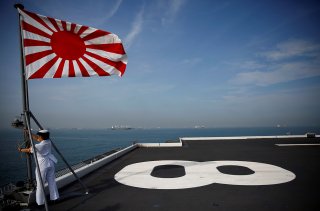 The Point: History and many other issues are the reason why. Byt that could change—and soon. What will Asia think?

Japan has decided to refit its Izumo-class light carriers to operate the F-35B stealth fighter. So modified, the Izumos will carry about a dozen F-35Bs each, giving the Japanese Maritime Self Defense Force a small but significant aviation combat capability.

In 2006, Japan laid down the first of two fourteen-thousand-ton Hyuga-class helicopter destroyers at IHI Marine United Yokohama Shipyard. In 2012, Japan laid down the twenty-thousand-ton Izumo, a light carrier in all but name, followed shortly by her sister Kaga. While the Hyugas could conceivably operate the F-35B, there is no indication thus far that the JMSDF intends to retrofit them.

This article first appeared in February 2019 and is being republished due to reader interest.