Everyone is Worried About Kamikaze Boat Attacks (Like the U.S. Navy) 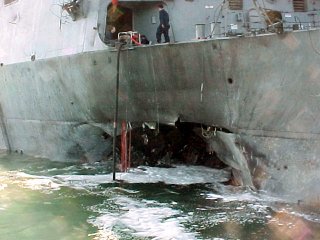 Here's What You Need To Remember: Murakhovsky pointed to a January 2017 attack on a Saudi frigate off the Yemeni coast, in which three small suicide boats piloted by Houthi militants attacked the ship, damaging the stern and killing two Saudi sailors.

The U.S. Navy has long worried about suicide attacks on its ships by explosive-laden small boats.

Now it's Russia's turn. After an aerial drone attack by Syrian rebels on two Russian bases in Syria, and with Russia basing large warships in the Syrian port of Tartus, Moscow is worried that its ships will be targeted by nautical kamikazes.

"Russian military experts do not rule out that terrorists in Syria might use explosive-stuffed boats operated by suicide bombers or drones to attack Russian warships," announced Russian news agency TASS back in 2018.

The TASS article featured commentary from editors at several Russian defense magazines. "An unmanned boat is no problem either from the commercial or the engineering point of view," said Arsenal Otechestva editor-in-chief Viktor Murakhovsky. "Any motorboat can be equipped with a control system, then be loaded with explosives and be driven into a target. Such a system can be mounted on a motorcar or by other transport vehicle.

Murakhovsky pointed to a January 2017 attack on a Saudi frigate off the Yemeni coast, in which three small suicide boats piloted by Houthi militants attacked the ship, damaging the stern and killing two Saudi sailors.

It's a wake-up call for Russia that the U.S. Navy heard loud and clear in October 2000, when an Al Qaeda suicide attack damaged the destroyer USS Cole. While the ship was being refueled in the Yemeni port of Aden, a explosive-filled motorboat detonated along the side of the vessel, killing seventeen American sailors. As if that wasn't enough, Iran has also hinted that it would resort to suicide boats in a conflict with the United States, and it would certainly employ swarms of rocket-armed small boats to overwhelm larger American vessels. Hence the U.S. Navy is devoting considerable effort to develop countermeasures, including antiswarm boat missiles and cannon, and even unmanned counterswarm boats to intercept the floating kamikazes.

Russia is also considering its own defensive options. "According to Murakhovsky, Russian ships in Tartus can be protected against such threats by means of using defense booms and patrol boats," TASS said. Murakhovsky added that "such explosive-stuffed boats can well be detected by optical and radio radars and destroyed by machine gun and automatic gun fire."

Interestingly, the TASS article also included explanations from Russian officials and experts that the rebel drone attack on the Khmeimim air base and the port of Tartus could not have been launched without foreign assistance. Which suggests that should suicide boats target Russian vessels, the United States will be blamed.