Extreme Weather is Influencing Movement in the United States 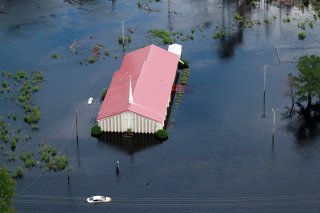 If it seems like extreme weather disasters such as hurricanes and wildfires are becoming more frequent, severe and costly, it’s because they are. And that trend is influencing people’s movements.

Since 1980, the United States has experienced 258 “billion-dollar weather and climate disasters” – defined as disasters resulting in US$1 billion or more in economic losses – totaling $1.75 trillion in losses, according to the National Oceanic and Atmospheric Administration. About two-thirds of these disasters and three-quarters of these losses have occurred since the early to mid-2000s.

Natural disasters force millions of people to move every year, a trend which is expected to accelerate around the world due to a changing climate. This is true in the United States as well.

Social scientists like me have seen this already occurring in the U.S. Using a combination of data sources, research shows that, while there are many factors at play, extreme weather disasters are one of the reasons that people migrate to other parts of the United States. An increase in extreme weather events could mean that disaster-driven migration will become more frequent.

One early example is “Dust Bowl migration” from the U.S. Great Plains during the mid-1930s. Due to a combination of factors including, but not limited to, severe multi-year drought, social erosion and economic hardship, an estimated 2.5 million people migrated from Great Plains states to California and elsewhere in search of economic opportunities.

More recent was the fallout from Hurricane Maria. In a study my colleagues and I published earlier this year, we found that migration from Puerto Rico increased considerably following Hurricane Maria in 2017 and that only about 12% to 13% of people who left the island had returned some two years later.

There are many limitations to the data available from the U.S. Census and other commonly used administrative and survey sources for studying migration, including during and after extreme weather disasters. In our case, we were able to overlay migration data from the Federal Reserve Bank of New York/Equifax Consumer Credit Panel on U.S. census tracts, which crudely approximate neighborhoods, to track the movements of people after Hurricane Maria.

People, populations and places are vulnerable to extreme weather disasters by virtue of their “lack of capacity to cope and adapt,” according to the Intergovernmental Panel on Climate Change. The capacity to cope and adapt requires economic, social and political resources. As a result, natural and social scientists are increasingly in conversation since extreme weather disasters and climate change more broadly are as much a “wicked social problem” as a natural one.

For example, one of the many lessons learned from Hurricane Katrina in 2005 was that the capacity of residents in New Orleans and other affected areas to cope with and adapt to this disaster strongly differed by race, socioeconomic status and other factors. Another and more general way to say this is that inequality today matters a great deal for the ability to cope with and adapt to extreme weather disasters tomorrow.

The research literature refers to these people and populations as effectively trapped in place, a predicament which raises a number of serious concerns about the potential for large-scale humanitarian emergencies.

A recent World Bank report forecasts that by 2050 some 143 million people worldwide could be forced to migrate within their countries due to extreme weather disasters and climate change. Adding the number of people who will potentially cross international borders means this figure is likely to be far higher.

First, researchers from different disciplines, including both the natural and social sciences, need to collaborate to better understand the scope of and solutions to the problem.

Second, as a migration scholar, I share the concerns of my colleagues about the availability, quality and comparability of migration data, particularly data on migration during and after extreme weather disasters and on highly vulnerable people and populations. Perhaps as it has with the COVID-19 pandemic, the U.S. Census Bureau might experiment with new data collection strategies in this area.

Finally, having attended the Paris climate talks as an official observer in 2015, I see a strong need to “embed the social sciences” in discussions and debates, policies and interventions pertaining to extreme weather disasters and climate change more broadly.