Eyes In the Sky: The SR-71 Was a Remarkable Feat of Engineering 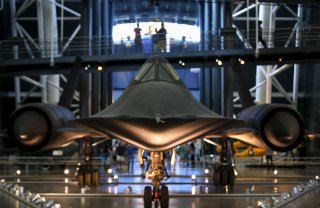 Here's What You Need to Remember: After a brief return to military service in the mid-1990s, a few SR-71s lingered as NASA test assets, finally transferring to museums in 1999.

Twenty years after its final retirement, the SR-71 Blackbird spy plane still is the fastest and highest-flying aircraft ever.

In 36 years of service with the CIA, the U.S. Air Force and NASA, the 50 SR-71s and A-12, FY-12 and M-21 variants flew missions over the Middle East, Vietnam and North Korea and supported important research.

"It still looks like something from the future, even though it was designed back in the 1950s," Peter Merlin, the author of Design and Development of the Blackbird, told CNN.

"Because of the way the fuselage bends and the wing curves and twists, it looks more organic than mechanical. Most conventional airplanes look like someone built them -- this one almost looks like it was grown."

The vulnerability of the subsonic U-2 spy plane spurred the SR-71’s development, CNN explained.

“In May 1960, an American U-2 spy plane was shot down in Soviet airspace while taking aerial photographs. Initially, the U.S. government said it was a stray weather research aircraft, but the story fell apart once the Soviet government released photos of the captured pilot and the plane's surveillance equipment,”

The incident had immediate diplomatic repercussions for the Cold War and reinforced the need for a new type of reconnaissance plane that could fly faster and higher, safe from anti-aircraft fire. "The CIA wanted a plane that could fly above 90,000 feet or thereabouts, at high speed and as invisible to radar as it was feasible," said Merlin.

The task of designing such an ambitious machine fell on Clarence "Kelly" Johnson, one of the world's greatest aircraft designers, and his secret division of engineers at Lockheed, called Skunk Works. "Everything had to be invented. Everything," recalled Johnson, who died in 1990, the same year the Blackbirds were first retired from service.

To allow the Blackbird to withstand the friction and resulting heat of 2,000-miles-per-hour flight, Johnson decided to build the plane mostly from titanium. But there were problems.

“First, a whole new set of tools -- also made of titanium -- had to be fabricated, because regular steel ones shattered the brittle titanium on contact,” CNN explained. “Second, sourcing the metal itself proved tricky.”

"The USSR was, at the time, the greatest supplier of titanium in the world,” Merlin said. “The U.S. government had to purchase a lot of that, probably using bogus companies."

Twin Pratt & Whitney J58 engines and the inlet that fed them air were the key to the SR-71’s high speed. The engines operated in afterburner mode during all phases of flight save mid-air refueling. “To handle the dramatic changes in air speed and pressure, air literally had to be slowed down to subsonic speeds before entering the jet engines,” the Smithsonian’s National Air and Space Museum explained on one of its websites.

“Starting the engines was no easy job,” recalled Jim Norris, a member of the Blackbird design team. “The J-58s’ oil, formulated to lubricate at the high temperatures at Mach three, was virtually solid at temperatures below 86 degrees.”

“[I]n the early days two highly modified 425-cubic-inch Buick Wildcats, an estimated 500 horsepower each, were used to turn a massive starter shaft that was inverted into the first one, then the other of the SR-71’s J-58 engines. One sound I shall never forget is that of those unmuffled Buicks holding steady at better than 6,000 revolutions per minute in excess of 15 seconds at a time, all hours of the day and night.”

But all that performance came at a high cost. The SR-71’s “reliability was an issue, and 12 out of 32 were lost to accidents,” CNN reported.

"It took an army of people to prepare the aircraft,” Merlin said. “A Blackbird operational mission essentially had a countdown, like a space mission did, because there was so much preparation involved in both getting the crew ready and the vehicle ready, an unbelievable amount of effort and manpower.”

The pilot “basically wore a space suit, the same sort of thing that you would later see space shuttle crews wearing," Merlin added. "The cockpit also got very hot when flying at high speeds, so much that pilots used to warm up their meal on long missions by pressing it against the glass."

The Air Force first retired the SR-71 in 1990. Satellites and later drones assumed its reconnaissance mission. After a brief return to military service in the mid-1990s, a few SR-71s lingered as NASA test assets, finally transferring to museums in 1999.