F-15 ACTIVE: This Frankenstein Fighter Was Better Than the F-15 Eagle 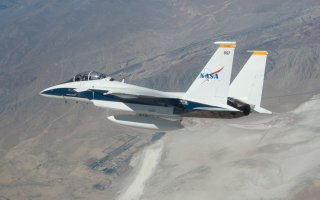 The F-15 has long been a legendary fighter, but NASA’s ACTIVE program aimed to make it even better. Faced with the looming threat of nuclear war with the Soviet Union, the United States began testing next-generation capabilities before the 10th F-15 even rolled off the assembly line.

In the 44 years since the F-15 Eagle first entered service, the air superiority fighter has proven its combat mettle time and time again, racking up an astonishing 104 kills against enemy fighters without ever losing a bout. Today, the twin-engined F-15 remains the fastest fighter in the American stable — with a top speed of Mach 2.5 that eclipses both its super-computing younger sisters, the F-22 and F-35.

There’s no doubt that the F-15 is among the world’s most capable dogfighters, but that doesn’t mean nothing on the aircraft could be improved by throwing a bit more money and research at it–and that’s precisely what NASA chose to do with its Advanced Controls Technology for Integrated Vehicles (ACTIVE) program (among some others). In order to explore new possibilities, the Air Force decided to take a prototype for what would have been the two-seater F-15B and use it as a one-off technology demonstrator in a series of advanced efforts.

What resulted was a Frankenstein fighter with a variety of components and systems that managed to make the legendary F-15 even better.

In 1984, the Flight Dynamics Laboratory out of the Air Force Aeronautical Systems Division awarded a contract to McDonnell Douglas to begin development on an F-15 concept that would allow these highly capable fighters to take off and land on short or damaged runways. The concept was fairly straightforward: In the event of a war with the Soviet Union, airstrips would likely be among the first targets. As a result, the Air Force wanted to ensure they could still get fighters in the air even after such a bombardment.

These efforts to modify the F-15 to take off from water-soaked, damaged runways were bolstered by the introduction of thrust vectoring technology. Thrust vector controls allow the pilot to literally aim the outflow of thrust from their aircraft’s engines (independent of the fuselage itself).

In more advanced thrust vectoring platforms like Russia’s Sukhoi Su-35, thrust vector controls allow the jet nozzle to move in any direction, whereas the experimental F-15 STOL/MTD utilized a simpler two-directional thrust vector control that allowed the pilot to orient the outflow of thrust up to 20 degrees up or down.

That vector control of the engine outflow was further supported by the addition of canards in 1988, just in front of the F-15’s traditional wings. The canards themselves were actually modified horizontal tail surfaces stolen from the F/A-18 Hornet.

By using these additions, the F-15 tech demonstrator managed to take off at speeds as low as 42 miles per hour, and reduced the length of runway required for takeoff by 25%. In order to shorten landing requirements, the program leveraged reversible thrust from the aircraft’s engines in conjunction with its canards and thrust vector control to reduce landing roll by a whopping 78%. While a standard F-15 Eagle needed more than 7,500 feet of clear runway to land, the F-15 STOL/MTD could do it in just 1,650.

The front canards also served to increase maneuverability at lower speeds. A similar approach has since been adopted by China’s Chengdu J-20, the nation’s first stealth fighter.

In 1993, the Air Force handed the keys to their F-15 STOL/MTD to NASA for the purposes of their new ACTIVE program, which was short for Advanced Control Technology for Integrated Vehicles. Building off of their previous digital flight control programs like HIDEC and Performance Seeking Control (PSC), NASA opted to retain the unusual wing layout of their new F-15 in the ACTIVE program, hoping to use the fighter as a testbed for a whole swath of systems that could come to find use in the next generation of fighters.

However, the F-15 ACTIVE did test some flight systems that would go on to find a home in the forthcoming F-15E Strike Eagle, or a variant of the F-15 intended for air-to-ground engagements. In fact, during the ACTIVE program, the cockpit of the testbed F-15 was modified to match that of the F-15E.

Another important change NASA made in their F-15 ACTIVE testbed was the introduction of Pratt & Whitney pitch-yaw balance beam nozzles (PYBBN) on a new set of engines; the F100-PW-229. Unlike the previous thrust vector control apparatus under the STOL/MTD program, these new nozzles offered a full 360-degree arc in which the nozzles could redirect outflow.

Combined, these systems produced a new aircraft that bore only a passing resemblance to the F-15 it started out as, and according to Air Force and NASA observations, was actually a better performer in the air.

NASA officials estimated that stability at supersonic speeds was improved by a factor of more than 100% by the addition of the new front canards.

Still an F-15, but no longer ACTIVE

The F-15 that found a home in both the STOL/MTD and the ACTIVE programs (serial number USAF S/N 71-0290) would go on to continue serving as a technology testbed for programs like IFCS (Intelligent Flight Control System) and others. Throughout all of its testing iterations, the front canards and thrust vectoring power plants remained on the aircraft, which, along with its spectacular paint job, make it hard not to notice just how different this incredible fighter really was.

The intent behind these efforts was never truly to add to the capabilities of the F-15, but rather to test what capabilities the United States could develop for further generations of fighters, but in doing so, NASA and the Air Force also proved that the F-15 was, and remains, much more than the sum of its parts.