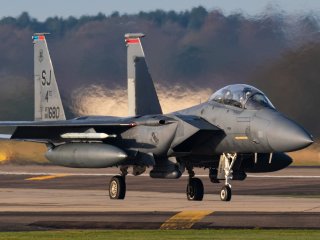 Key Point: Necessity has long been credited as the mother of invention, and that could certainly describe the McDonnell Douglas (now Boeing) F-15E Strike Eagle. Developed to keep pace with the emergence of the MiG-23 and MiG-24 fighters, the United States Air Force sought to replace its fleet of McDonnell Douglas F-4 Phantom IIs, which had been in service since 1960.

The program began in 1967 and after more than two years of intensive testing and evaluation, the Air Force awarded McDonnell Douglas the F-15 Advanced Tactical Fighter contract, after the aviation maker placed first amongst the three competitors in all phases of the competition but also had the lowest contract price.

The single-seat, all-weather, air-superiority fighter was a noted departure from the F-4, a tandem two-seat, long-range jet interceptor and fighter bomber. While the F-4 could engage a ground-attack role, this was initially deemed unnecessary by the F-15 Special Project Board.

However, the designers at McDonnell Douglas continued to work on a potent multi-role version as the F-15E Strike Eagle, which can fulfill both roles of air-to-air superiority and ground strike. That two-seat version of the F-15 Eagle provided the USAF with an aircraft that could fight its way to enemy territory, engage and destroy enemy aircraft, destroy an assigned ground target and fight its way back home without the need for additional air support.

The F-15E Strike Eagle made its maiden flight in 1986 and since 2001 the Air Force has used the aircraft almost exclusively for close-air support. The plane's navigation system utilizes a laser gyro along with GPS to continuously monitor its position and to provide information to the central computer and other systems, which include a digital map to both the pilot and WSO (weapons systems officer).

The Strike Eagle's APG-70 radar system also allows the crew to detect ground targets from great distances, and during an air-to-surface strike the pilot is able to detect, target and engage air-to-air targets while the WSO can designate a ground target. The plane's LANTRIN (Low-Altitude Navigation and Targeting Infrared for Night) system can also allow the F-15 Strike Eagle to fly at very low altitudes even in adverse weather conditions and at night.

Early aircraft were powered by Pratt & Whitney F100-PW-200 engines, while later batches of the Strike Eagle featured the more powerful P&W F100-PW-229 engines, but each incorporates advanced digital technology that provides for improved performance. This allows pilots to accelerate from idle power to maximum afterburner in under four seconds, while the faster acceleration allows for quicker takeoffs and better response while maneuvering.

Given its ability to fight to the target and back, it is easy to see why this has been the dual-role fighter of choice not only for the USAF and U.S. Air National Guard but also the air forces of Israel, Japan, Singapore and Saudi Arabia. This version of the F-15 can soar like an eagle and strike just as hard.