F-15EX: The Fighter Plane Russia Is Praying Joe Biden Sends In a War? 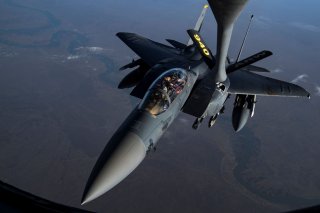 Here’s What You Need to Remember: The F-15EX is, at least in terms of its external configuration, modeled upon 1980s engineering, yet it does contain quantum-like improvements in computing, radar range and sensitivity, avionics, sensing and weaponry. However, it simply is not stealthy. its construction, configuration, coating and external shape do not resemble the stealthy exterior of an F-22 or F-35, and it does not appear to have an internal weapons bay,

While many are possible of the view that, despite the growing threat,rWhat does it mean for fourth-generation aircraft? If the threats to fifth-generation stealth fighters are becoming much more substantial, how could a new fighter such as an F-15EX survive in this kind of threat environment?

Some are likely to pose this question with new urgency in light of a recent revelation that the Pentagon has “skipped over” or simply avoided full-up system-level survivability testing for the F-15EX, passing by the one true measure of whether the aircraft could still be relevant in a high threat environment. Without an established ability to operate amid the highest threat scenarios expected, could the now arriving F-15EX be obsolete upon arrival?

The scenario was taken up in a recent analysis from Inside Defense, which cites Pentagon documents confirming that Full Up System Level survivability testing for the F-15 has been waived.

Many of the technical specifics may not be known for obvious security reasons, yet there are some broad parameters regarding newer air defenses that are of great relevance to consider.

The changing threat scenario is part of why, for many years now, senior Air Force weapons developers have said that stealth configuration itself is but one element of a larger integrated approach necessary to elude modern air defenses. Speed, thermal signature management, radar-absorbent coating materials, EW technologies to jam enemy radar and advanced sensing able to locate air defenses are all signature elements of the Pentagon’s cutting edge approach to stealth.

While the thinking with the waiver may be to simply use a new 4th-Gen-like aircraft for lower threat warfare scenarios, there are many less expensive platforms that can succeed in a non-contested or much less contested airwar environment. So why spend the money on the F-15EX if its ability to operate against the most likely and most significant threats is not known or established? Does the aircraft linger in a certain kind of liminal uncertainty, meaning that it might be overqualified for most uncontested environments yet insufficient to counter the highest threat or most contested environments such as those containing Russian or Chinese air defenses?

The F-15EX is, at least in terms of its external configuration, modeled upon 1980s engineering, yet it does contain quantum-like improvements in computing, radar range and sensitivity, avionics, sensing and weaponry. However, it simply is not stealthy. its construction, configuration, coating and external shape do not resemble the stealthy exterior of an F-22 or F-35 jets, and it does not appear to have an internal weapons bay,

As a fourth-generation 1980s airframe, the F-15EX is not as flat, sloped or rounded as a fifth-generation plane, and most likely not built with a mind to seams, bolts and other attachments specific to procedures needed to construct a stealth aircraft. The F-15EX also has a protruding cockpit, much like the original variants, as well as some sharp edges, likely to generate a stronger radar return signal.