The F-15EX Is Just What the Air Force Needs 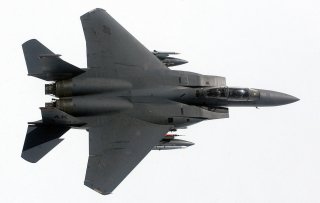 We live in uncertain times. In addition to a global pandemic and civil unrest within our borders, there are various mounting adversarial threats abroad.  Superpowers like China and Russia are investing huge sums in their military while conducting threatening exercises in neighboring regions of critical interest to the United States. Our country has always invested in advanced technology weapon systems for defense to ensure a level of deterrence, and today is no different.

A necessary component of military readiness is mission effective aircraft and trained personnel to fly and maintain them. An ongoing concern for our military has been an aging fighter fleet. As military leaders look to the next generation of air dominance, a key player will be the F-15EX. I’m a former F-15 operations analyst with McDonnell Douglas. I’ve followed its effectiveness in a variety of conflicts and can say that the government is getting a proven airframe with a new set of advanced technologies that make the F-15EX a critical asset to meet our future threats.

The F-15EX is the newest generation F-15 fighter. Its capabilities include increased maneuverability, greater range, and a higher weapons payload. It has dual engines, delivering greater mission capability as well as increased redundancy for pilot safety. The F-15EX was designed as the first U.S. fighter aircraft with the ability to carry hypersonic weapons, a new class of extremely high-speed weapons for stand-off strikes and threat deterrence. This will be essential for readiness against any potential confrontation.

The multi-mission F-15EX complements the F-35 and provides a lethal combination that can deter future conflict. Multiple mission analysis studies have supported this conclusion. The Eagle's performance in combat is second to none. Many international allies rely on the F-15 for defense, and some allies have plans to invest in the F-15EX.

Importantly, the F-15EX is ready to go today. The Eagle's efficient production line is in place, and its delivery record is impressive. The F-15EX is compatible with existing U.S. Air Force infrastructure. That means the U.S. Air Force will spend minimal time and taxpayer dollars on new military construction to support the aircraft. Further, 90 percent of the required support equipment is already in the Air Force inventory, and 70 percent of the required spare parts are already in its supply system for the F-15C/D aircraft.  These similarities will dramatically reduce the need for retraining of pilots and sustainment personnel, saving additional time and money. Over its lifetime, the F-15EX will save the U.S. Air Force and taxpayers billions of dollars in production, sustainment, and operation costs.

Innovation and technological advances in military equipment have made U.S. freedom possible. The upgraded and modernized F-15EX is part of a new generation of fighters that will be pivotal in today's battles and U.S. airpower in the future.

These challenging and uncertain times require the best our nation has to offer. When faced with military threats from abroad, the F-15EX will help keep our military men and women safe and operating at the highest levels of defense while respecting taxpayer investment.

Paul "Korky" Korkemaz is a former Operations Analyst at McDonnell Douglas. He worked on the Advanced F-15 program and also served in business development and program management as an executive at Honeywell and Sabre Systems.