The F-15EX Is Taking 4th-Generation Jets Beyond Their Limits 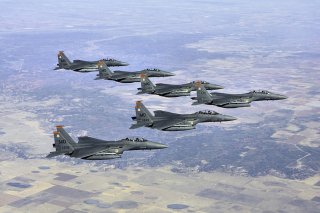 Here's What You Need To Remember: Other attributes or performance enhancements built into the F-15EX include more thrust and an increased weapons-carrying capability which places two new weapons stations further out on the wings. The F-15EX can now carry 12 missiles as well as elements of its standard arsenal to include the AIM-120D, AIM-9x missiles and typical JDAMs, Boeing developers said.

Described by the Air Force as a two-seat fighter with U.S. only capabilities, the F-15EX is intended as a next-generation variant of the combat-tested, 1980s-era F-15 fighter. While still a 4th-Generation aircraft, developers argue that the plane’s new adapted technologies and upgradeability make it a viable, lethal, high-threat environment-capable attack platform.

Boeing developers told The National Interest that the outer mold line of the new F-15EX variant is similar to the legacy aircraft with some upgraded modifications strengthening the wing and fuselage.

“We have used proprietary manufacturing techniques so it has gotten stronger and the flight controls went from hydromechanical to fly by wire. The F-15EX’s digital flight control system airplane allows more carefree handling,” a senior Boeing weapons developer told The National Interest in an interview last year.

Fly-by-wire flight controls naturally increase the degree of onboard computer processing and autonomy-enabling technologies, and the aircraft is reported to contain massive avionics upgrades to include an integrated 10in X 19in digital touch screen display. Much of this is made possible through the integration of a new onboard computer system reported by Boeing experts to be capable of performing 87-billion functions per second. This emerging computer technology is also being leveraged to support a Mission Data Files system, a threat library of information incorporating threat-specific data. The system, described by Boeing experts as of particular relevance to electronic warfare, can draw upon incoming sensor information, bounce it off a database of known threats and identify particular enemy targets such as a Russian enemy fighter jet.

Other attributes or performance enhancements built into the F-15EX include more thrust and an increased weapons-carrying capability which places two new weapons stations further out on the wings. The F-15EX can now carry 12 missiles as well as elements of its standard arsenal to include the AIM-120D, AIM-9x missiles and typical JDAMs, Boeing developers said.

The now-being-built F-15EX is reported to incorporate a large number of impactful innovations, yet that does not mean it is in any way comparable to a 5th-generation fighter. Its advantage is multi-faceted in that it is lower cost and more readily able to be produced than an entirely new system, and it brings previously unavailable warfighting systems to 4th-gen fighters. One interesting question would be to see how an F-15EX performs in wargames or mock combat exercises against a Russian or Chinese-like 5th-Gen aircraft.

Kris Osborn is the Defense Editor for the National Interest. Osborn previously served at the Pentagon as a Highly Qualified Expert with the Office of the Assistant Secretary of the Army—Acquisition, Logistics & Technology. Osborn has also worked as an anchor and on-air military specialist at national TV networks. He has appeared as a guest military expert on Fox News, MSNBC, The Military Channel, and The History Channel. He also has a Masters Degree in Comparative Literature from Columbia University. This article first appeared earlier this year.