Is the F-15QA the Most Powerful Variant of the Iconic Jet Fighter? 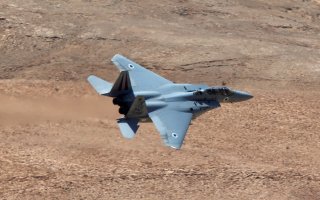 Here's What You Need To Remember: The F-15QA will enhance the superiority of Qatar's Air Force with more speed, range, and payload than most fighters in the world.

Boeing earlier this week announced the naming and rollout plans for a new plane that it is providing to Qatar’s air force.

The event was held Wednesday in St. Louis, where Boeing announced the arrival of the  F-15QA fighter jet, which was developed by the U.S. Air Force and Qatar Emiri Air Force (QEAF).

“The rollout of the F-15QA is momentous, not just in terms of capability but also in terms of the enhanced partnership it represents. The relationship the United States shares with Qatar is critical to the stability and security of the central command area of responsibility, and we are grateful for our coalition partner’s continued focus on building interoperability and combined readiness,” Lt. Gen. Greg Guillot, commander of 9th Air Force. “It is a privilege and honor to stand with our Qatari counterparts this day and every day.”

Following pilot training, the first planes will arrive in Qatar later this year. Boeing is also set to “establish and operate an aircrew and maintenance training center for the QEAF at Al Udeid Air Base in Qatar.”

“The Qatar F-15QA program further enhanced next-generation technologies in the advanced F-15 such as the fly-by-wire flight controls, an all-glass digital cockpit and contemporary sensors, radar and electronic warfare capabilities,” Prat Kumar, vice president of the F-15 program, said in the release. “Driven by digital engineering and advanced manufacturing, these aircraft represent a transformational leap for the F-15. The F-15QA will enhance the superiority of the QEAF with more speed, range and payload than any fighter in the world.”

Back in January, we looked at Qatar’s relationship with its neighbors. As Mustafa Menshawy wrote, Saudi Arabia, the United Arab Emirates, Bahrain, and Egypt all cut ties with Qatar in 2017 while demanding that it shut down the Al Jazeera network.

At the same time, the parties agreed to end the embargo and restore relations.

“The reconciliation has brought a sense of relief in all four countries. Ordinary people paid a deep humanitarian price – many are linked by close tribal ties and there are thousands of cases of cross-border intermarriage (to give you an idea of how close the Saudi Arabia and Qatar are, consider that it takes just an hour to drive from Doha to Saudi territory),” Menshawy wrote.

“This may all sound like a return to normality, but skeptics pointed to the fact that, while the two feuding leaders talked of ‘brotherly unity’ and desires for ‘Gulf unity’, neither mentioned an agreement on any of the issues that caused the crisis. On the one hand, everyone’s a winner – but, on the other, we don’t know how or why. The situation has been described as a ‘detente borne more of exhaustion than compromise.’”

Qatar is set to host the FIFA World Cup this year.